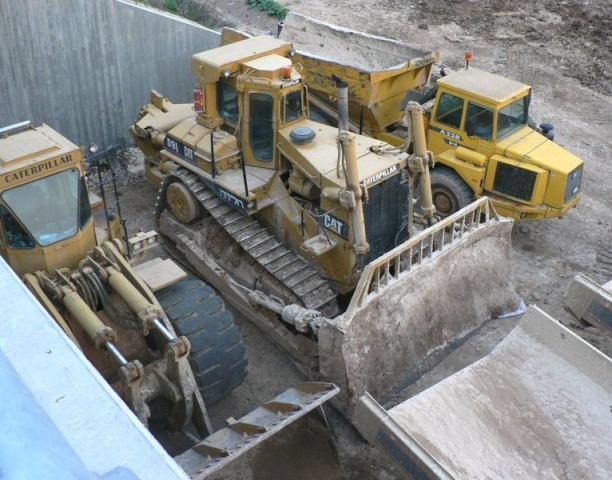 Breaking news in the Israeli mainstream news and blogosphere reports that a man driving a bulldozer ploughed down the streets of Jerusalem in a mad rampage, mimicking the tractor attack of 20 days past.

An estimated 24 people were wounded and three killed when armed civilian Yaakov Asael and border guard Amal Ganem shot the driver dead, ending the assault. The murderer is reportedly a Palestinian from East Jerusalem in possession of an Israeli identity card.

While a gag order has been placed on the mainstream news media in releasing an identity, the blogosphere reports the attacker’s name as Ghasam Abu-Tir. His name was released with initial news of the attack and widely publicized on the radio, but is now being hidden by official news sources.

A Soldier’s Mother writes in This is Israel an entry entitled, “It’s Happened Again”:

Yet again, a bulldozer has been used as a terrorist weapon to hurt innocent civilians. Today’s terrorist has been identified as Ghasam Abu-Tir, a relative of Hamas lawmaker Muhammad Abu-Tir… The terrorist was 22 years old and a resident of an Arab neighborhood in Jerusalem… What Israel will do as a result of this latest attack…no one knows. Stay tuned and pray for the wounded.

Brian Blum of This Normal Life recounts his day in Jerusalem:

Amir and I were downtown when the police cars and ambulances started zooming past us, their sirens blaring. We had just finished an ice coffee at The Coffee Bean and Tea Leaf and were waiting at a bus stop to go home. One after another, the police sped down Jaffa Road. There must have been at least 100 vehicles in just a few minutes. The reason was clear: there had been a terror attack. But we didn’t know what or where…

Was it a suicide bomber on a bus? An explosion at a cafe? The police all seemed to be heading in the direction of the King David Hotel. Wasn’t British Prime Minister Gordon Brown staying there? Had U.S. Democratic candidate Barack Obama already arrived. About that time, my cell phone died, leaving us incommunicado.

The bulldozer driver had apparently been working just around the corner in nearby Yemin Moshe, one of Jerusalem’s most fashionable and expensive neighborhoods. Two accomplices fled and the police were sealing off any possible escape routes. Immediately after the attack, politicians began calling for a ban in the employment of East Jerusalem Arabs as construction workers in the city. But how? Jerusalem these days is one big construction zone. Bulldozers abound. Do we need to fear walking past a new building going up like we once avoided cafes and buses? What means will the terrorists use next?

…In another hour we have guests coming from overseas for a pizza party. Tonight I have a conference call with the States. Just another day in Jerusalem. Life goes on. But a normal life? Never.

Izzy Bee of Israelity Bites was also having an average day until she encountered “Massive Weapons of Construction”:

Today, I was coming back from my dentist appointment and took a shortcut through the YMCA carpark (It’s across the street from the King David Hotel, where British Prime Minister Gordon Brown and his wife had just left and Barack Obama is due to check in tonight.) Timing is everything, they say. Just ten minutes later, chaos broke out.

Once again a Palestinian construction worker –aren’t they all?—let loose against the traffic in the heat of a Jerusalem afternoon. After he rammed a bus and passing cars with his bulldozer, armed civilians shot him dead. One car driver was seriously hurt, and at least ten other people were injured, including a scuffed up little baby.

Another heavy equipment terror attack just occured on Jerusalem’s crowded streets. Another Arab terrorist is off to meet his 72 virgins. I can only pray that they are all male… and none too tender about their first time.

I really have nothing constructive to say about this.

Jameel of The Muqata posts about the incident including photos and videos, as well as updated news about the attack. He explains:

Once again, civilians keep the streets of Jerusalem safer. The responsible person for shooting and killing the terrorist was a civilian. A Border policeman apparently also took part. There are 5 wounded, 2 of them in serious condition and one of the wounded is an infant. [Note: these numbers are now outdated] 2 cars and a bus were damaged by the tractor. The attack took place near the King David hotel.

Since this attack comes about two weeks after the first bizarre construction vehicle rampage in Jerusalem, it is certain to stoke the debate here about whether this is a new strategy being used by Palestinians – and what can be done to stop these attacks.

Since the first attacker acted alone and had no known ties to militant groups, it was thought that the rampage might be a strange anomaly.

But, as newspaper editors always tell us, it only takes three to call something a trend.

Now we have two.

In “Race of Suffering,” Lirun of East Med Sea Peace adds questions of her own:

Another psycho attacker has struck innocent pedestrians in jerusalem… i wonder who will suffer the most.. will it be israelis.. the wounded.. our economy.. world image? will it be the palestinians.. their farmers.. the residents of jerusalem or their world image? how many new roadblocks will be set up?

In a post entitled, “Using Technology to Tell You I Am OK,” Israluv of Sabra at Heart reassures:

Another terrorist bulldozer attack near my neighborhood and it means I need to change my status on Facebook, MSN Messenger, Gtalk and twitter to let everyone know I am ok. It makes life a bit easier to share the news via the web and lucky for me most of the people I know use one of the many different services listed above.

Changing my status online doesnt stop the influx of “are you ok” phone calls but it definitely helps me share the news with those who don’t live in Jerusalem or even in this region with my status. My parents are still in New York and since we are 7 hours ahead I have to notify them before they even awake that I am ok…

Looking forward to the day my status online no longer needs to be updated to tell people that I am ok.

Jerusalem Mayor Uri Lupolianski reacted to today’s attack saying, “You throw terrorists out the door, they climb through the window with all kinds of means and ideas. Every working tool becomes a means of terror and we must rethink how we employ those working here.”

A Note to My Readers–

At this time, I’d also like to add a personal note to my Global Voices Online readers, who I know to be intelligent and critical media consumers. As you are reading news of this incident, please take into consideration the tone and words that different news sources use in describing it and how it reflects the content of the article. Does the headline mention people or objects? Who does it hold responsible for what happened? How does the author view the attack in light of the larger situation in Israel and Palestine?

Compare these sampling of headlines:

What is your country saying? Do bloggers’ headlines differ from those of the mainstream news? Please add your own findings in the comments section. Let’s compare.