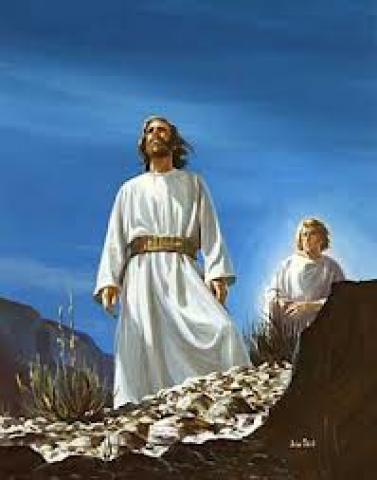 Many think lucifer/satan, to be cunning, sly, and devious, and I guess to a degree he might be these things. But he will never be able to out smart God or Jesus, for they know the question, even before it is asked. I see him more as an egotistical, self-centered, conceited, arrogant, liar and stupid too.

Now I know it is not nice or right or Christian, to call anyone stupid, but I’m making an exception with this guy and I’ll explain why. His original downfall in heaven came, when he thought himself to be as God, thinking himself as smart, or, smarter than God, and having as much knowledge and wisdom and power as God. Lucifer desired to be equal to God.

We have to realize that Lucifer/satan knows Jesus. He knows that Jesus is God, the only Son of The Father. He knew Jesus during the creation. When God speaks; "Let Us create man in ‘Our Image’ after ‘Our Likeness’ " in GENESIS 1: 26, Jesus was a part of that "Our" He knew Jesus at Jesus birth in Bethlehem.

It is not scripturally displayed this way but I believe that Lucifer/satan taunted Herod the Great to have all the firstborn children killed, hoping Herod would also kill Jesus the Son of God, a plot that failed. Herod being a vain and insecure king feeling threatened by the possibility of some new king taking over didn’t need a whole lot of prodding.

Jesus Is baptized in the river Jordan by John the Baptist and Almighty God speaks to John and the people as we read in MATTHEW: 3: 17; "And ther came a voice from heaven saying, ‘Thou art my beloved Son, in whom I am well pleased." Almighty God has just declared to the world that Jesus, the man getting baptized is the "Son of God", it can’t get much plainer than that, Jesus is God’s Son.

Jesus in order to ready himself for the start of His ministry goes off into the desert 40 days and nights to fast and to talk with The Father in prayer. Here is where Lucifer/satan demonstrates his stupidity. He knows Jesus as God, yet he tries to tempt God to turn against Himself. In MATTHEW: 4: 3-10 we can read of the three times that we are aware of that Lucifer/satan tries to tempt God/Jesus the "Son" of God" to turn against himself.

Does he not know that God cannot turn against Himself or go against Himself? Does he not realize that even though God/Jesus has taken on Flesh, He is still God? How can any being who thinks himself equal or better than God think and act and speak to God in such a stupid way.

MATTHEW: 12: 22- 28; While Jesus is working through His ministry and performing miracle after miracle, while he teaches those who would listen, a person possessed by the devil who was blind and dumb and Jesus not only heals him but casts out the devil from him, and the people were astonished and amazed.

When the Pharisees hear about it, they accuse Jesus of being Be-el-ze-bub the prince of the devils. Even when Jesus is doing good, lucifer/satan seems to want to take the credit, but Jesus asks them

"And if Satan cast out Satan, he is divided against himself; how then shall his kingdom stand?"