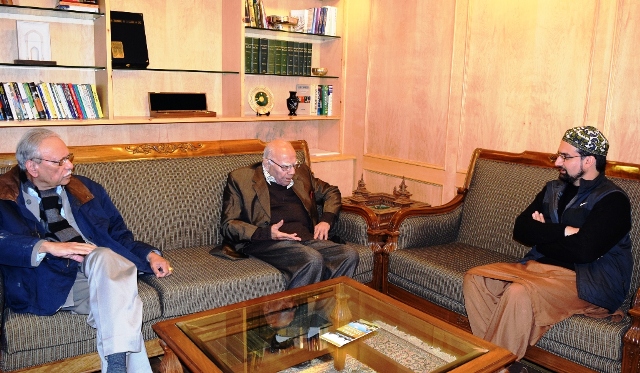 During his meeting, Mirwaiz apprised the two member team about the damages incurred due to devastating
floods in Kashmir.

Expressing his regret over the discriminatory policy adopted by the state and the central government regarding the relief and rehabilitation of flood victims, Mirwaiz informed his guests that authorities had failed to address the needs of flood victims.

He told them that government has also not allowed foreign donors and relief agencies to help the flood ravaged people of Kashmir.

Terming the ongoing escalation of tension between India and Pakistan as perilous for the security of
entire region, Mirwaiz told the two members that till Kashmir issue- the major point of confrontation between two nations, is not solved, instability would continue to plague the sub continent.

Speaking during the meeting, Jethmalani said that termination of talks between India and Pakistan and the
recent flare of tension was highly unfortunate.

He said the peaceful and result oriented talks were the only way to resolve all the issues existing between the two countries, adding, nobody would like to see a nuclear war in the region.

He stated that the talks were the only way which would improve the relations between the two nations and would lead to solution of disputes.

Meanwhile while welcoming the decision of OIC general secretary Iyad Madni whereby he supported the solution of Kashmir dispute and pledged to raise them on international forums, Hurriyat Spokesman stated that OIC has always advocated the cause of voiceless Kashmir.

He further said time the support of OIC for Kashmir cause and appointing APHC as observers in the cooperation of Islamic countries, the body has shown its unflinching support for the Kashmir movement.

The spokesman further has welcomed the OIC decision to form a department which would work towards
stopping the rights violation in Kashmir and would raise them on international forums.
SOURCE http://scoopnews.in/det.aspx?q=42209