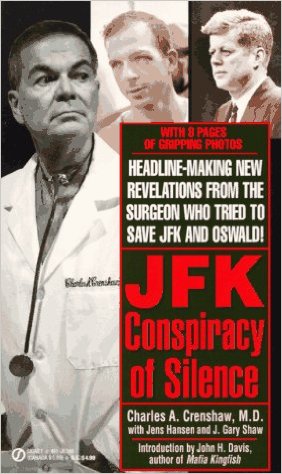 A triumvirate wrote this book: 1) a doctor who was a resident at Parkland Hospital in Dallas in November, 1963, laboring to save both John F. Kennedy and Lee Harvey Oswald, 2) a ghostwriter, and 3) “one of the world’s top authorities on the Kennedy assassination.” The book is set in two separate typefaces, one for Dr. Crenshaw, one for everything else, all in a minute-by minute journal format. Crenshaw writes in the first person:

With only three hours’ sleep since Friday morning, I felt exhausted. So, I was lying down in the residents’ call room, dozing. It was the lightest day I can ever remember having at Parkland. The whole city was in shock over the President’s death. For the moment, people had quit drinking, stabbing, and shooting.

Captain Fritz holds the fourth interrogation of Oswald in his office. Present for this interview are other homicide officers, Secret Service Agent Kelly, and FBI agent Bookhout. On this occasion Oswald is shown and enlargement move forward of the photograph of himself holding the guns. This time he repudiates its authenticity, declaring the “face is mine,” but the body was not, and the photo was a composite. He understood photography real well, he said, and in time he would be able to show that it was not his picture.

1) The absolute nobility of Jackie Kennedy, and her great line after the assassination, when she’s urged to change her bloodstained pink suit: “No! I want THEM to see what THEY have done.” [Capitals in the original.]

2) LBJ who comes off as a quietly malevolent Mafia-level Godfather:

When I entered the office, the receiver was lying on the desk.

“This is Doctor Crenshaw, may I help you?”

“This is President Lyndon B. Johnson,” the voice thundered. “Doctor Crenshaw, how is the accused assassin?”

I couldn’t believe what I was hearing. The very first thought that I had was, how did he know when to call?

“Mr. President, he’s holding his own at the moment,” I reported.

“Would you mind taking a message to the operating surgeon?” he asked in a manner that sounded more like an order.

“Dr. Shires is very busy right now, but I will convey your message.”

“Dr. Crenshaw, I want a deathbed confession from the accused assassin. There’s a man in the operating room who will take the statement. I will expect full cooperation in this matter,” he said firmly.

3) The fact that JFK had charisma even in death. (“In astonishment, I beheld the President of the United States lying before me. Blood was caked on his steel-gray suit, and his shirt was the same crimson color. Even in that condition, his charisma filled the room.”)

4) The absurd story of the surgeons laboring in Parkland Hospital to save Kennedy while half his head was blown off. Western medicine is, at times, deeply childlike.

By the end of the book, I was convinced. There is a tonal difference between JFK and the rest of the dreary American presidents. He is the youngest, the handsomest, the first Irishman, and therefore the most brave. Though his politics were vague at best, Kennedy did seem like a man who could not be controlled—in fact, like a man out of control.

Nowadays, the press would just reveal a couple of his mistresses and destroy him on TV, as they did with Clinton, but 1963 was a more literal era. They didn’t want to tarnish the mythical office of the President. Better to kill JFK, transform him into a saint, co-opt the civil rights movement, destroy the Democratic Party, and commence a spiraling maelstrom in Southeast Asia.