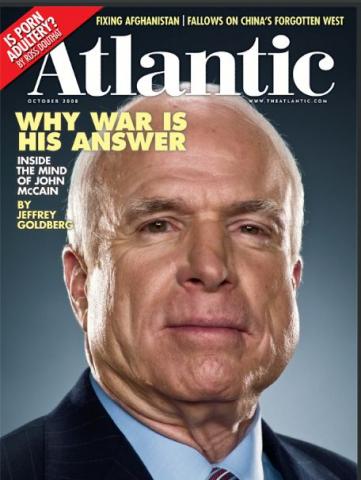 Jill Greenberg, the freelance photographer who photographed presidential candidate John Candidate for the cover of the most recent issue of Atlantic Monthly, posted doctored images from the photo shoot to her website.

Jill Greenberg, who is openly anti-Republican, posted photos from the Atlantic shoot in which McCain looks evil and foreboding with captions reading "i’ll have my girl kill roe v wade." Some critics also say that Greenberg, who is known for manipulating her images, left the McCain image untouched with red eyes and bad skin, but the editors take responsibility for using the image on the cover.

The Atlantic Monthly issued an apology to John McCain about the use of the photographs and did not pay Greenberg for the session. The magazine might consider legal action against Greenberg for violating their contract.

There picture that made the cover of the magazine is included in this article. Decide for yourself if it casts John McCain in an evil light or not.

Here is another GroundReport article about John McCain.