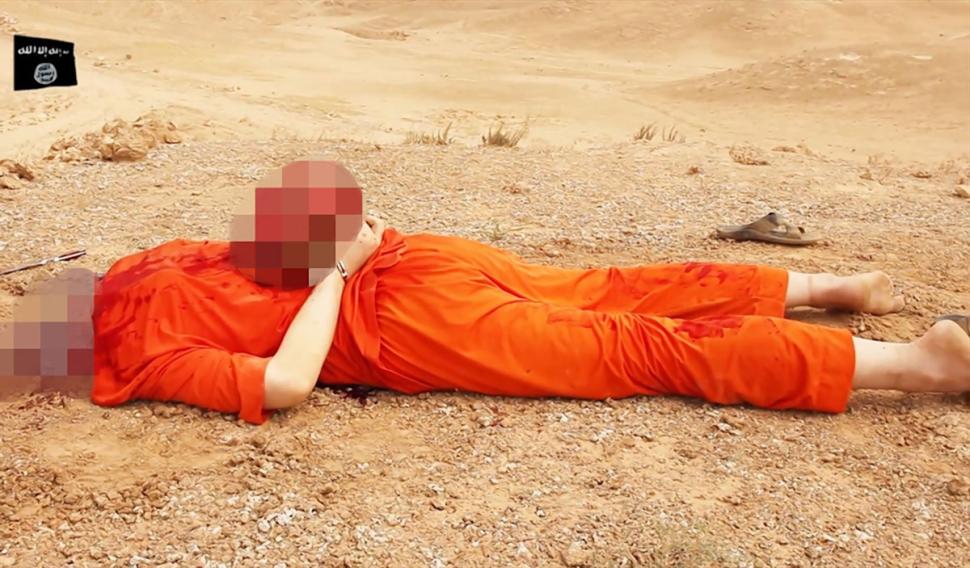 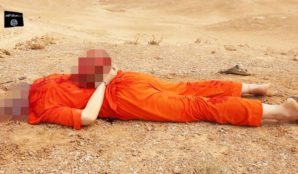 The gruesome beheading of reporter Jim Foley helped galvanize a nation against ISIS. Pictured here after his brutal beheading the terrorist placed his head on the small of his lower back as a sort of sick joke.

On September 8, 2014 Senator Shaheen of New Hampshire asked for permission to address the United States Senate regarding Jim Foley – the American reporter who was brutally beheaded by ISIS (The Islamic State of Iraq and Syria). What she said was very emotional as it was compelling.

Senator Shaheen serves as a powerful member of the Foreign Relations Committee. As a member of the U.S. Senate Committee on Foreign Relations, she is read into some of the most sensitive intelligence reports dealing with terrorism and foreign affairs. She undoubtedly has been privy to various high level briefings on the particulars surrounding Foley’s death at the hands of ISIS.

What follows is a unedited copy of her speech on Mr. Foley:

“Mr. President, I would like to honor James Foley, a proud son of New Hampshire, whose life was guided by love–love for the humanity he devoted his life to documenting, love for his family members who worked tirelessly to secure his release, and love for God who brought him strength and comfort, even in the darkest moments.

The entire Nation was saddened to hear the news about Jim. It was with a heavy heart that I joined the Foley family and a crowd of nearly 1,000 on August 24 at Our Lady of the Holy Rosary parish in Rochester, NH, to memorialize Jim and reflect upon how he chose to live his life.

As we here pause to remember Jim, we cannot allow those responsible for his death to fill us with sorrow and despair. Though the sense of loss remains, through Jim’s life we may hope to rediscover a sense of optimism and goodness–the same feelings that motivated him as a journalist to search for humanity in the world’s darkest and most dangerous places.

When I think of Jim, I will remember his fierce passion for his work and for the people whose stories he lived to tell. I will remember the interminable spirit of his parents, Diane and John. And I will remember how New Hampshire, and Americans across the country, came together to support the Foleys.

Jim Foley’s life began in Wolfeboro, a small New Hampshire town on the shores of Lake Winnipesauke. He graduated in 1992 from Kingswood Regional High School, where classmates remember him as light-hearted, but also caring and eager to see the world. As the oldest of Diane and John Foley’s five children, James developed a strong sense of responsibility for others.

Jim was known in his family for running late because wherever he went he ran into friends and colleagues who wanted to stop and catch up with him. Jim’s uncommon kindness earned him the trust and friendship of people across the United States and the world.

Jim’s compassion for others and his desire to learn their stories is what motivated his life’s work. According to his parents, Jim’s exposure to the poverty of inner-city Milwaukee while attending Marquette University led him to realize that people are often shaped by events and circumstances out of their control, and that it was within his power to tell their stories.

He carried this mission with him throughout his life and used it as a basis for his work in conflict zones.

After graduating from Marquette, Jim started down the path that would turn him into the successful journalist he became. He first taught history for 3 years at middle school in Phoenix, AZ, a world away from his upbringing in the Lakes Region of New Hampshire.

Eager to learn how best to turn his experiences into compelling stories, he went on to complete master’s degrees in writing and journalism at the University of Massachusetts-Amherst and Northwestern University. Classmates of Jim’s at Northwestern recall that when one of his professors assigned him to cover a neighborhood in the Lower West Side of Chicago, Jim decided to move there, a telling decision for a future frontline journalist.

Jim later gained experience in conflict reporting while covering U.S. military operations as an embedded reporter in Iraq and Afghanistan, but he worried that being removed from the local population detracted from his reporting to people back home.

When a wave of popular revolutions swept the Middle East and North Africa in the spring of 2011, Jim knew that he needed to bear witness to this incredible phenomenon from the perspective of those living through it.

Jim left for Libya, where he provided critical stories on the Libyan civil war until he was captured and imprisoned for 44 days by pro-Gadhafi forces.

Others who were detained with Jim tell stories of his unending selflessness toward his fellow prisoners–how he shared food, blankets and an endless stream of jokes to help everyone cope with a difficult and scary situation.

Furthermore, when Jim returned to the U.S. after his release, he was frequently asked to tell the story of his capture and detention. Instead of focusing on his own experience, Jim used the publicity to raise money for the family of a colleague who had been killed in the attack that led to Jim’s capture. It was Jim’s nature to care more about others than he did about his own personal successes or accolades.

In his reporting from Libya, Jim discovered that his passion was in helping the world relate to those in the middle of unimaginable conflict, and he would soon return to the region, this time to Syria, where Bashar al-Assad was escalating his brutal tactics of repression to maintain control of the country.

It was in the Syrian chaos that observers began to talk about rise of a group of militant Islamists calling themselves the Islamic State of Iraq and Syria, the same group that would later hold Jim hostage for 637 days alongside a handful of other innocent journalists and aid workers.

Thanks to a message Jim passed to his family through a fellow prisoner who was released, we know that his close relationship with God and his family provided him with strength in captivity.

In the letter, he thanked his family and friends for their thoughts and prayers, and recounted treasured memories from time spent together. Most strikingly, he spent most of his words offering encouragement and support to those he loved. Even in the most trying circumstances, Jim Foley refused to abandon his core concern for others over himself.

We will always remember Jim for his compassion and devotion to the lives and stories of others, even in the most difficult conditions.

We are all proud to call James Foley our fellow American.”

Note: The Senator apparently isn’t aware that ISIS was trained and funded by the US government as part of President Obama policy designed to overthrow the government of Syria. We called the Senator’s office and staffers refused to comment on this issue of US culpability of helping create the ISIS monster in the first place – saying “no comment.” When asked if Senator Shaheen would support a Congressional investigation into Obama’s policy of arming terrorist in violation of international law – the response was “no comment.”

See related article:  Has the Obama administration ever armed ISIS with lethal weapons? Inquiring minds would like to know! https://groundreport.com/has-the-obama-administration-ever-armed-isis-with-lethal-weapons-inquiring-minds-would-like-to-know/

See also video: US was responsible for training ISIS in Jordan http://www.youtube.com/watch?v=yhuo7-U7mOo

Filed under: News, Terrorism
Share Tweet Pin G Plus Email
previous article: Will Boston Red Sox 2B Dustin Pedroia be placed on the shelf for the rest of this baseball season?
next article: Barbara Kruger. An exhibition to question your mind.