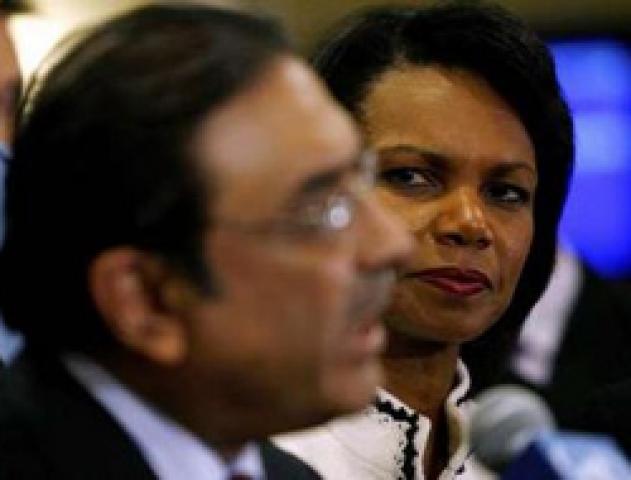 The National Conference (NC) President, Omer Abdullah said: "The change is from Pakistan side not from Kashmiris side; Kashmiri people cannot tolerate any change in Pakistan’s policy on Kashmir. It was just a change in mode of people which keep on changing. The protest was just a reaction of Kashmiri people over what Pakistan President said. "

Probably for the first time in the history of Kashmir, people in thousands came out of their houses, defying the curfew which was clamped in entire Kashmir Valley, to thwart the Lal Chowk Chalo march of Kashmir Coordination Committee (KCC) and rock the areas of Baramulla raising slogans in anger against the Pakistan President, Asif Ali Zardari. They also burnt his effigy.

While some experts are viewing the development as a major change in the mindsets of Kashmiri people against Pakistan who are known worldwide for raising anti-India and pro-Pakistan slogans, National Conference (NC) President, Omer Abdullah said that it was mode of the people which keeps on changing.

However, he ruled out any change in the mindsets of Kashmiri people, mentioning that it was anger against the Pakistani President, as he tried to change the Pakistan policy on Kashmir which the Kashmiri people could not tolerate.

But the fact is that in view of curfew in the Valley, people could not come out of their house to protest against the Pakistan President for his remarks saying that Islamic militants fighting in Kashmir are ‘terrorists’, as they were not in favour of repeating the incidents of clashes with the security forces as seen in the recent past in which dozens of people were killed and hundreds injured.

It is worth mentioning here that at least 2000 people in Baramulla area defied the curfew restrictions and they took to the streets to denounce Pakistani President Asif Zardari and burnt his effigy.

It is the first time that a Pakistani leader’s effigy has been burnt in Kashmir where anti-India protests have often been marked by pro-Pakistan slogans. It is said that Zardari has provoked outrage after being reported as saying that Islamic militants fighting in Kashmir are ‘terrorists’ that irked the Kashmiri people.

They were, however, soon pushed back to their respective areas by the police and CRPF jawans.

Sources said that almost all the separatist leaders were either put under house arrest or they were detained well before the march yesterday. The whole Lal Chowk area was converted into fortress with deployment of police, para-military force and army jawans.

All the roads and lanes linking the Lal Chowk area were sealed by erecting barricades and spreading concertina wires. No vehicular traffic was allowed to move towards the Valley on the Jammu-Srinagar National Highway by the administration since last evening.

The administration had announced the suspension of vehicular traffic in advance citing the reason that some repair had to be carried out on the NH.

Yesterday, the police detained several separatist leaders and put some of them under house arrest along with their activists to outwit the KKC’s Lal Chowk Chalo march.

Police had begun a crackdown on the separatist leaders and activists on October 4, 2008.

However, Kashmir Coordination Committee (KCC) has announced that the march would be totally peaceful and all sorts of inflammatory slogans would be refrained.

But to foil the march, the administration continued crackdown on the separatist leadership and activists.

The cops raided the residence of senior Kashmiri Hurriyet leader, Syed Ali Geelani and Jamiat-e-Ahl-e-Hadees chief, Maulana Shaukat Ahmad Shah in Srinagar barring their movement.
Huge deployment of police, CRPF and army jawans were made and the indefinite curfew was imposed since yesterday morning.

Meanwhile, the Hurriyat Conference criticized the state authorities’s decision to impose an indefinite curfew to prevent separatists from organizing a march to Lal Chowk, saying it was an ‘undemocratic process’ as the government was not listening to the views of the people.

"Imposing curfew is not a democratic process. People’s voice should not only be heard but also acted upon… it will be in the benefit of all the concerned," former Hurriyat Chairman and senior separatist leader Abdul Gani Bhat.

He said the separatist leaders were willing to adopt an alternative method for conveying the wishes and aspirations of the people to the Centre if New Delhi did not like the present mode of agitation.