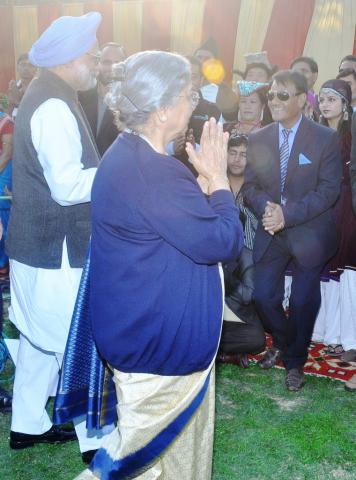 The Prime Minister, accompanied by wife, Smt. Gursharan Kour, exchanged pleasantries with J&K Tableau artists,  drawn from the three regions of the State, and posed for a photograph with them.

A contingent of six artists from the State later participated in a cultural item, Hindustan ka Guldasta’ jointly presented by the artists from 14 states whose tableaux have been selected for participation in the Republic Day parade on January 26. Interestingly, the programme was choreographed by Randhir Kumar, choreographer with the J&K Academy of Art, Culture & Languages. The presentation was highly appreciated by the audience.

A contingent of 25 artists from Jammu & Kashmir is participating in the Republic Day parade with the State Tableau. This year, the theme of the tableau is Pashmina with special focus on Noori, world’s first cloned Pashiman goat. The technological breakthrough was accomplished by the scientists of Sheri-Kashmir-University of Agricultural Sciences & Technology, Kashmir on March 9, 2012.

Earlier on Wednesday, the artists of Jammu & Kashmir won Special Award for their brilliant performance at a cultural evening held at the Rashtriya Rangshala Camp. Artists from all the 14 participating states presented their items.