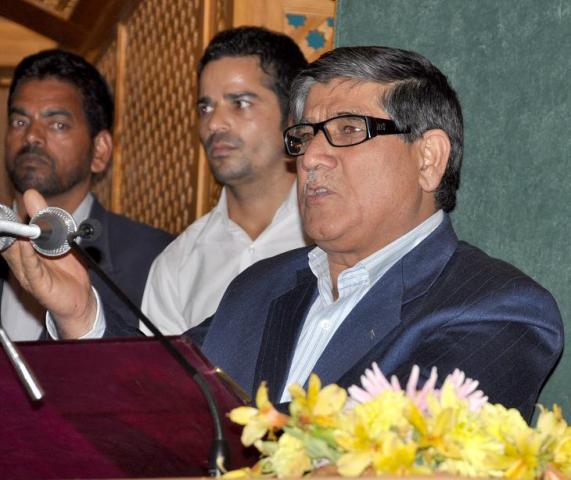 Soon after start of today’s session, the Speaker  Mohammad Akbar Lone broke out the sad news about the passing away of late Bhatt.

Paying rich tributes to him, the Speaker highlighted the contribution of deceased Speaker in strengthening parliamentary democracy in the country. He said the late leader was champion of secularism, who worked for promotion of secular values and democratic principles throughout his political career.

Meanwhile Speaker  Mohammad Akbar Lone today issued directions to the Government for strict regulation of transport facility to the fruit growers for carriage of their produce to different markets of the country. He called for proper monitoring of transportation rates fixed by the government for the purpose.

He was intervening during the reply of Finance Minister to a point raised by  M. Y. Tarigami seconded by  Mohammad Ashraf Ganai during Zero Hour, in the Legislative Assembly.

Minister for Finance while responding to the point said that in view of the limited availability of trucks reportedly, higher transportation rates are charged to fruit growers. He said that additional fleet of trucks has been requisitioned from the neighbouring state of to minimize the chances of over charging and overcome shortage of trucks.

Maintaining that the government has already taken various measures, including exemption of toll tax at Lakhanpur to the vehicles entering the state for a period of three months from August onwards.  He said this will prove helpful for the smooth transportation and marketing of fruits to other cities of the country.

Minister of State for Horticulture,  Javed Ahmad Dar also informed the House that in view of the difficulties confronted by fruit growers in the transportation of fruits during the unrest in the Valley, he has convened a meeting attended by the officers of line departments, transporters and fruit growers. He said, it was decided for the smooth transportation of fruit, the position will be reviewed fortnightly, adding that it was also reported that some truckers after unloading were fleeing during night hours and after debating the issue instructions were issued to concerned to check this practice from Pantha Chowk to Lower Munda and ensure the trucker is brought back to the fruit mandi for transportation of fruit.