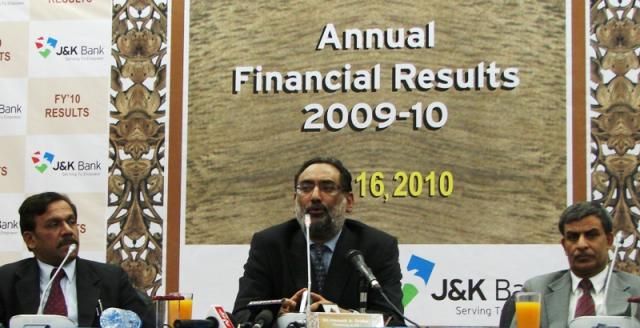 Srinagar,May 16 (Scoop News) –  Chairman and Chief Executive of J&K Bank ,Dr Haseeb A Drabu,said that the J&K Bank is a leading bank not only in the J&K State, but throughout the country and also have a good net work  in the foreign countries also. He said the Bank has won laurels throughout the  country  also for its best performance and working as a family bank and quoting the J&K Bank the  States strongest bank with strong and steady income growth rates .

Addressing a press conference held at Sheri-Kashmir International Convention Complex(SKICC) the Chairman Dr Haseeb A Drabu said the Bank has won laurels throughout the  country  also for its best performance and working as a family bank and quoting the J&K Bank the  States strongest bank with strong and steady income growth rates .

Announcing the JK Bank’s annual financial results for the year 2009-10,the Bank has registered a net profit of Rs,512.38 crore up  by 25% from Rs.409.84 crore recorded during the previous financial year driven by a 70% rise in fee based income up to the end the last financial year 2009-2010.He further said that the net profit for the quarter ended Mar,2010 increased by53% and stood at Rs.120.04 crore  compared to Rs.78.68 crore earned during the quarter ended March,2009.  Drabu said that due to softening  of interest rates during the year ended Mar,2010 ,the yield on advances came down by 88  basis points to 10,65%,which was more than compensated by a decline of 98 basis points in the cost of Deposits from 6.22% to 5.24% .The net interest margins ration(annualized) of the Bank for the quarter ended Mar,2010 was at 3.27 % compared to 2.97 % for the corresponding period of the previous fiscal year while for the year ended March,2010 was at 3.04 % compared to 3.15% a year ago. The Chairman further said that the Bank has considerably improved its Free Based income during the current financial year by 70% from RS.425 crore to Rs.416 crore, the major contributor being Treasury/Trading income.

He said that the operating profit for the year up to March,2010 increased by 24% year on year to Rs 958 crore from Rs.774 crore  earned during the previous financial year. He further said the Operating income for the current year was 1536 crore as against Rs.1245 crore for the last fiscal registering an increase of 23%.

Moreover, the Return on Assets for the current year improved to 1.20% compared to 1.09 % for the previous financial year. With the leveraging of technology and managing costs efficiently, the Bank continues to bring down its Cost to income ratio which is at 37.60% for the year ended March,2010 compared to 37.81% a year ago

In a question, under Banks vision, the J&K Bank has targeted its business up to 2012 to RS. one lakh cores and the profit worth RS.1,000 crores.

He further said that newly created Common Service Centers known as Khidmat Centers shall be utilized to provide basic banking facilities to the people.

Drabu further said that from the last last two –three years, the bank has touched to newer heights and said the Bank has introduced Insurance, healthcare, financial patronage to the under privileged members of the society as also loans for almost all commercial, agrticultural, educational and personal needs.

Darbu said that there is no any hurdle to get loan from bank, however, one has to fulfill all the obligations required for and has to complete all the paperwork. He further said that in fact the J&K Bank has reduced many hurdles and there is no question that the people are not getting loans from the Bank easily.