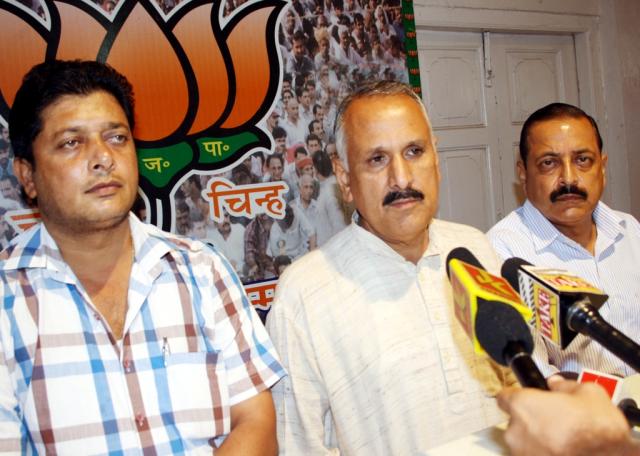 , September 18 (Scoop News)- BJP State President Shamsher Singh Manhas at a press cpnference at party headquarters stated that NDA has given a call against the recent steep hike in the prices of diesel, coking gas and permitting the foreign companies to open retail shops in the country under FDI.

Shamsher Singh Manhas said that the Congress led UPA government at the centre under the Prime Ministership of so-called most able Economist Dr. Manmohan Singh has been taking one decision after the other which have been hitting the people across the country making their lives miserable and the recent decision on FDI and hike in diesel price are the latest actions in this direction. There is general and  widespread anger and resentment throughout the country against these anti-people actions of the UPA.

The BJP, being a responsible opposition party has always stood for the cause of the masses and opposed all such decisions of the government which are aimed at enriching  a handful of people at the expense of common Indian and reducing him to penury, said Manhas.

Shamsher Singh Manhas said that the BJP, alongwith other constituents of NDA,  has appealed the people of the country, cutting across their political, social and religious affiliations, to support the September 20 Bharat bandh call so that a clear message goes to the Manmohan Singh led UPA government at the centre that the people of the country cannot be taken for granted any more and that they are now prepared to oppose all the anti-people, anti-trader and anti-transporter policies.

Manhas reiterated his appeal to all other political parties and their activists to come on the streets on September 20 to register their protest and disapproval of the anti-people actions of the Congres-led UPA government.