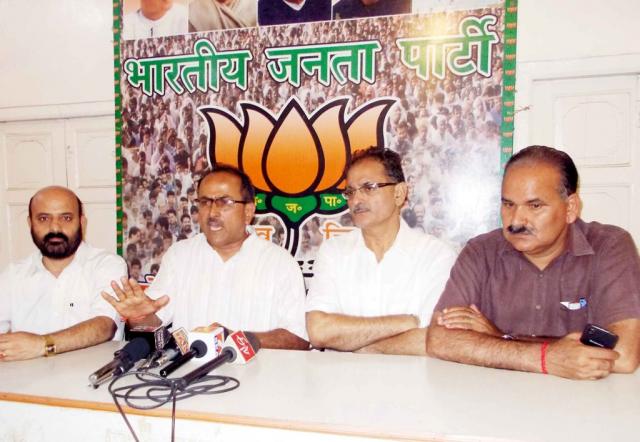 Addressing a joint press conference with party General Secretaries, Kavinder Gupta, Bali Bhagat and MLA Sham Choudhary, former president of BJP Dr Nirmal Singh said that  Sub-Inspector Shiv Kumar was arrested at the behest of some surrendered terrorists  because it was all due to valiant efforts of this SI that terrorism was almost wiped out from this belt so they  want to settle score with the brave officer.

“Those who have been involved in anti-terrorist campaign have, of course, sources in the groups of militants so it is not a new thing”, Dr Singh observed and ridiculed that on the statement of a notorious former terrorist, the police has registered FIR and arrested one of the most decorated cop of the Jammu and Kashmir Police, who has been instrumental in eliminating nearly about 70 terrorists from Doda belt. Dr Singh said that militancy is wiped out from Doda  district and credit for this goes to valiant officer like Shiv Kumar Sharma. “As the militancy is almost contained in there, some sympathizers of terrorists are desperately trying to revive it but officers like Shiv Kumar Sharma are biggest hurdle in accomplishment of nefarious designs”, Dr Singh said and added that some local politicians, belonging to both Congress and National Conference, were also desperate to revive militancy so all these forces have hatched a conspiracy to implicate Shiv Kumar Sharma in false case.

Dr. Singh, on the occasion, targeted Minister of State for Home Sajjad Ahmed Kitchloo for hatching this whole conspiracy to communalise situation in Doda district. “It is astonishing that a decorated cops, who have been credited with eliminating nearly 70 terrorists including some foreign mercenaries, is arrested on the statement of former militant who was involved in the killing of his own brother and a police constable”, Dr. Singh said and warned that BJP would not allow the state government to accomplish its nefarious designs to revive militancy in Doda district.

“On the directions of their political masters, local police officers have hatched a conspiracy to implicate Shiv Kumar Sharma” he said.

In the press conference BJP leaders announced that they have already brought this matter to the notice of the party high command. “This issue will be taken up in the forthcoming meeting of the national executive of BJP at Goa by the end of this week”, Dr Singh said and added that a high level delegation of BJP comprising MLA Sham Choudhary, State General Secretaries Bali Bhagat and Kavinder Gupta along with him has called on Inspector General of Police (IGP) Jammu and Divisional Commissioner Jammu to apprise them of the conspiracy behind the whole episode.

Meanwhile BJP has decided to stage a dharna at Doda on June 6, 2013against dangerous game plan of National Conference and Congress leaders. They have been deputed by the party to go Doda and participate in the dharna.