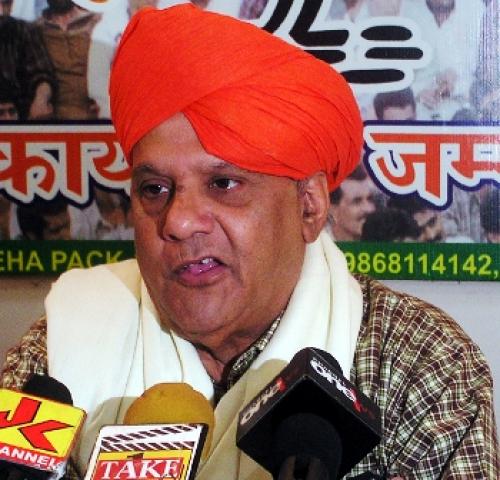 , November 29 (Scoop News) – Criticizing National Conference (NC)  and Congress for advocating the rehabilitation of Kashmiri militants presently staying in and PoK, State BJP today cautioned the nation that their return and rehabilitation in could lead to dangerous consequences so far security of the state and the country is concerned.

While talking to reporters in Jammu BJP National Executive Member & former State President Ashok Khajuria  said that the State Chief Minister Omar Abdullah, who got this policy okayed from the state cabinet is now being endorsed by J&K Pradesh Congress Committee President Saif-ud-din Soz without realising its far -off effects on the security scenario.”, These youth, who had gone across the borders before and after 1990 had received arms training in camps of Pakistan occupied Kashmir (POK)   by ISI, can prove disastrous for the people of the state and the country as they have been prepared to fight jehad against India, Khajuria, said.

Accusing NC and Congress for perpetuating turmoil in one or other form in the state for last over 20 years, the BJP leader said that the nationalist forces have to wake up and defeat the game plan of these parties, who are inch by inch taking J&K out of the fold of Union of India. He lamented that the representatives of Congress in particular from province in the legislature too are endorsing the policies of NC by maintaining silent posture just  to remain in the chair.  “These representatives of in NC and Congress seem to have abdicated the national interests for remaining  in the power”, he added.

BJP, as a party of nationalists, would never sit silent and will continue its struggle to defeat the mechanizations of such forces who are trying overtly or covertly for disintegration of Jammu and Kashmir from rest of the country, Khajuria said, adding our party will continue protests under constitutional means to make country men aware about the dangers with respect to the policies being adopted by Congress-led UPA at the centre and NC-led government in the State.

Khajuria reiterated that the party leaders and elected representatives will continue to bycott all the functions which are being chaired and attended by State Chief Minister and other ministers.

He said under a conspiracy, hundreds of acres of forest land is being illegally occupied by some unknown persons with the backing of the NC and Congress leaders, which may disturb the social fabric and communal harmony in province and the BJP will never allow them to succeed in their nefarious designs.