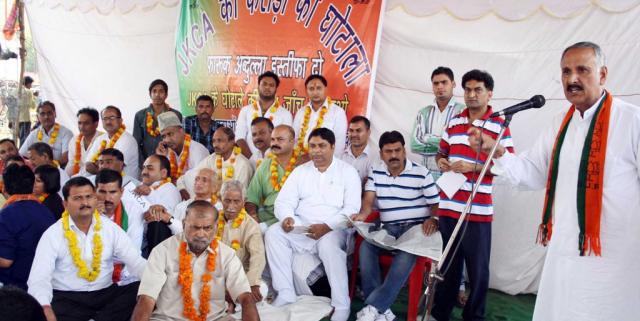 Jammu,October 03 (Scoop News) –   JK BJP State President Shamsher Singh Manhas today said that it is strange that ever since Jammu Kashmir Cricket Association (JKCA) scam came into existence, its president had always been Dr. Farooq Abdullah, which shows lack of inner democracy in the selection of its members and monopoly of a single family.

Shamsher Singh Manhas along with other leaders of the party was addressing party workers at Dogra Chowk on the second day of the fasting to be part of the crusade launched by the party on the issue of JKCA scam.The venue of  the fast witnessed rush of party leaders from Udhampur, Kathua, Akhnoor, Samba, R.S.Pura, Rajouri, Poonch, Sunderbani, Nowshera, Ramban and other parts of Jammu province.

The day’s programme commenced by paying homage and  observance of 2-minute silence in the memory of veteran Jana Sangh leader & former Governor Kedar Nath Sahni, who breathed his last this morning at New Delhi.

BJP President also referred to nexus between JKCA and J&K Bank and said that the NC government had always appointed Chairman and other senior officials of the JKCA as well as J&K Bank to serve its interests and to cover up money embezzlement. Re-iterating party’s demand of handing over the JKCA scam case to CBI, resignation of Dr. Farooq Abdullah from the Presidentship of JKCA and reconstitution of JKCA, Manhas said that nothing less than this will be acceptable and that the BJP will continue to agitate till these demands  are not met and the guilty brought to justice.

National Executive Member Dr Nirmal Singh said that both, the Congress led UPA-1 and now UPA-2, has created history for promoting corruption and shielding the corrupt ministers and bureaucrats. While BJP led NDA was tough on corruption, militancy and always serious for the welfare and survival of a common citizen, the UPA has only single agenda of making money by any means. He said the guide philosopher of puppet Prime Minister is Sonia Gandhi, who has least concern for aam aadmi and who himself has been enjoying  comforts at the cost of public exchequer. It is unfortunate that a patwari or clerk, is booked and punished whereas the UPA do not deem it necessary to book all the corrupt elements and provide a people friendly government in the country.

BJP National Executive Member & State Cheif Spokesperson Dr. Jitendra Singh said that Gandhi Ji was of the opinion that in Public life, fast (satyagrah) is most self effacing method of registering protest and therefore the 48-hour fast programme undertaken by State Unit under its President will go down as a selfless effort to establish moral values in Public life.

State Vice President Chander Prakash Ganga, while appreciating the initiative of BJP State President to highlight the corruption and scams in J&K, said that the leaders of other political parties who claimed to be against the corruption, should also join hands with BJP in its crusade against corruption.