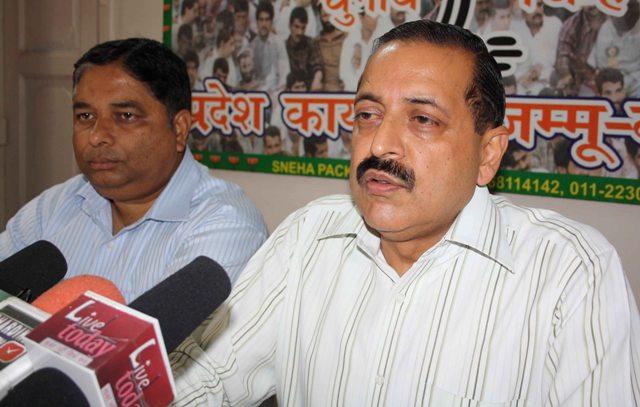 Disclosing this at a press conference here today at party hqrs., the BJP State Chief Spokesperson & National Executive Member Dr. Jitendra Singh said that as per para 2(1) (b) of the 7th Schedule of J&K Constitution, the BJP chief whip in the house Ashok Khajuria filed a petition for disqualification of legislators to the acting leader of house Jugal Kishore Sharma who under the J&K Constitution, in  his capacity as leader of BJP Legislators Party, holds the authority to disqualify the MLAs for violation of party whip.

The 7 MLAs against whom the notice of disqualification has been issued include Prof. Chaman Lal Gupta, Bharat Bhushan, Prof. Gharu Ram Bhagat, Baldev Sharma, Master Lal Chand, Jagdish Raj Sapolia and Durga Dass. The objections, if any, to notice can be filed within one week.

Dr. Jitendra Singh further disclosed that in his communication as Chief Whip, Ashok Khajuria had written to the acting leader of the Legislators Group that he had issued a whip to all the members of BJP asking them to vote in favour of the party candidate Th. Ranjit Singh. Khajuria further states that from the result of the election, it is clear that the seven (7) MLAs of BJP mentioned above did not follow party whip issued by him and indulged in cross voting. After narrating in writing the entire sequence of facts and circumstances related to the issue, Khajuria moved a petition before the acting leader that all the seven MLAs had incurred disqualification under para 2 (b) of 7th Schedule of J&K Constitution and may therefore by declared disqualified from being the members of Vidhan Sabha.

Dr. Jitendra Singh mentioned that every aspect related to the issue of cross voting is being dealt by the party High Command depending on the inputs received by it and in keeping with the constitutional procedures.