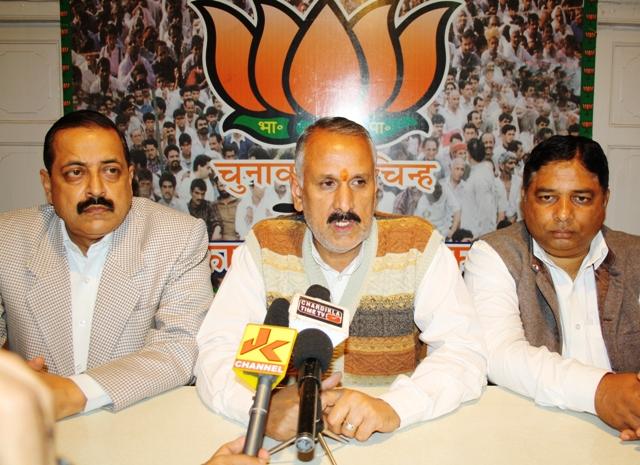 Jammu,March 29 (Scoop News) –   BJP has taken objection to  the announcement made by Speaker, J&K Assembly, that the time allotted in the assembly to BJP MLAs will be equally divided among 11 MLAs and not only among the 4 namely-Jugal  Kishore, Ashok Khajuria, Sukhnandan Kumar and Sham Choudhary.

Addressing a press conference at party headquarters, BJP State President Shamsher singh Manhas said that once the party has conveyed to the Speaker its decision regarding disqualification of 7 MLAs, he is bound by the Constitution of Jammu and to accord recognition to the remaining 4 MLAs as BJP representatives.

Manhas said that the logic of status quo put forward by the Speaker is also misinterpreted because the status quo order was passed only after disqualification had been announced and hence it does not mean reversal of the existing position. In other words, this could be interpreted that the suspension of the 7 MLAs had to be endorsed by the Speaker.

Citing the State Constitution, Manhas said that Speaker should take cognizance of 7th Schedule, Para 1 (c), whereby the prerogative to recommend disqualification of any MLA rests with the leader of the Legislative Party and the Speaker is obliged to go by his advice.

Mahas  expressed surprise that the MLA recognised by Speaker as Leader of the BJP Legislature Party was expelled from the party for six years by an order from High Command dated 31-05-2011 . He asked how the Speaker could accord the status of the leader of BJP Legislature Party to a member who is not even a primary member of BJP.

Manhas accused the NC-Congress coalition of conspiracy leading to the cross voting by BJP MLAs during last year’s election to legislative council and the present state of confusion on the issue.