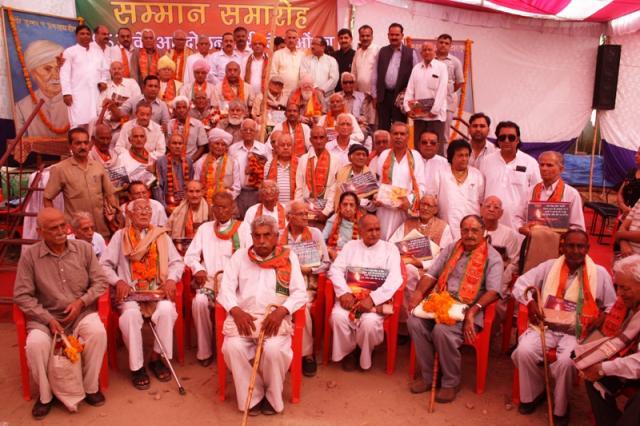 In an impressive function it started with the lighting of traditiomnal lamp and garlanding the portraits of BJS ideologues followed by observing 2-minute silence in memory of those patriotic citizens who sacrificed their lives while actively participating in historic agitation of 1953. It was held under the leadership of State President Shamsher Singh Manhas.

It was indeed a unique “” of veteran and young leadership of their times. All veteran heroes were honored for their active contribution in unification of the state with rest of . The journey of Praja Parishad to Bharatiya Jans Sangh and then to Janata Party, which finally culminated into Bharatiya Janta Party was discussed in the grand function. Over 600 activists of young generation garlanded and chaired the contribution of 100 veterans leaders present in the function.

Rishi Kumar Koushal and Yash Bhasin expressed hope that sacrifices made in 1953 will not go in vain although present leadership require to frame a strategy to complete the undone job of their generation and assured all possible help at this juncture of life. They said that Article-370 still exists and there is separate constitution and separate flag for the state  and the  present generation has to take up the finished agenda of full and complete integration of the state with the rest of .

Shamsher Singh Manhas, Dr. Nirmal Singh, Ashok Khajuria and Jugal Kishore Sharma assured  in their address to all that BJP is fighting against separatist tendencies which were existing in 1953 also and pledged that with the blessing of dedicated personalities of 1953, BJP will come out from the present turmoil and will make a history where total discrimination will be eradicated forever and  fight against Kashmir-centric approach will not be tolerated.