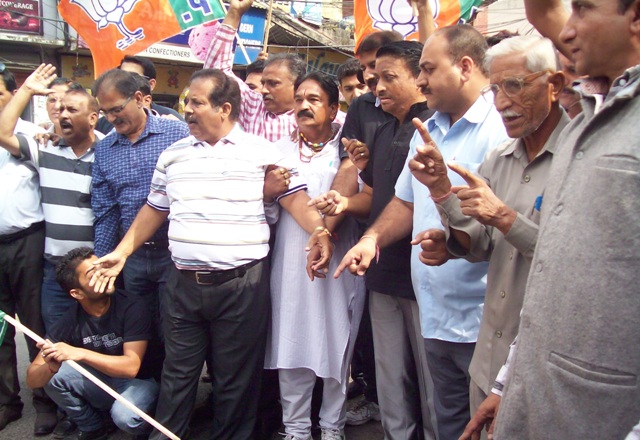 JK BJP protest against Pakistan’s firing and shelling on civilian

Kavinder Gupta, while condemning the Pakistan’s firing and shelling on civilian population on borders without any provocation, said that despite agreements and assurances, our neighbor country indulge in such acts every now and then, which is indeed very unfortunate. He said that during last few days Pakistan has targeted Arnia, R.S. Pura, Suchetgarh, Akhnoor, Pargwal, Hiranagar, Samba and other areas and have caused deaths and injuries to dozens of people besides damages to the houses etc.

Kavinder Gupta said that the BJP stands with the people in this hour of grief and sorrow and appreciate the strong retaliation by the Indian security personnel which have made Pakistan to realize that the Narendra Modi led NDA government is not like the earlier weak Congress led UPA government during whose rule there was soft approach, which had encouraged Pakistan to indulge in firing and shellings. He said that it has happened for the first time in the history of India that our forces have been given a free hand to deal with Pakistan strongly, which is the clear message of Narendra Modi that enough is enough and India will not tolerate any violation, any assault on our citizen and any kind of aggression. He appealed the opposition parties to support NDA in its action against Pakistan instead of politicizing it.

Subash Jandial said that while the Union government is doing its best to mitigate the problems of the border people besides giving a befitting reply to Pakistan, some leaders are playing politics and making attempts to tarnish the image of Narendra Modi by making irresponsible statements. He said that every Indian should get united to back union government to teach Pakistan a lesson instead of making misleading statements.