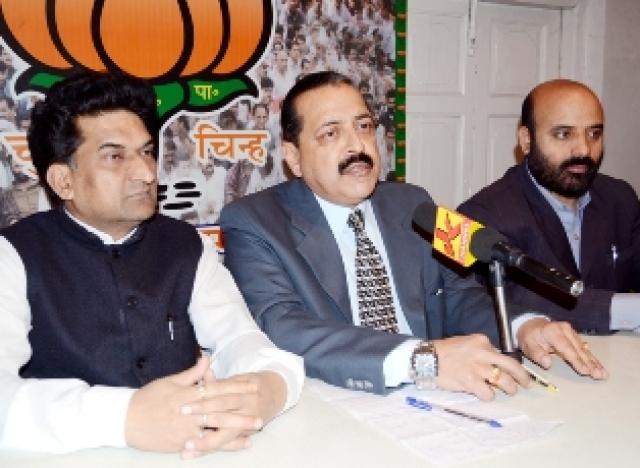 , March 13 (Scoop News) –On the eve of forthcoming Municipal Corporation and other local body elections, BJP has raised serious questions and objections to discrepencies, errors and possible manipulations in the voter lists and voter cards which, if not rectified, will turn these elections into a big farce.

Addressing a press conference  at party hqrs. here today, National Executive Member & State Chief Spokesperson Dr. Jitendra Singh, produced documentary evidence with papers and print-outs to show that in certain areas and wards, either the voter lists were not available and if available these were printed in such font or script that these were not legible. In cases where the voter lists were available and also legible, the information provided about name, age, parentage or residential address was either inadequate or erratic, he added.

Dr. Jitendra Singh said that in the absence of proper voter lists and voter cards, the National Conference-Congress coalition government is exposed to the charge of being dishonest in its decision to hold fair and free elections to local bodies and that the entire electoral exercise is being carried out with the ulterior motive of securing over 300 crore worth central grant in the name of local bodies which would later be subject to embezzlements and misappropriations as has been happening in the past.

Repeated  representations to state administration have evoked the response that the authorities may come out with fresh revised lists, said Dr. Jitendra Singh, but asked whether the revised lists would be published well in time so that all the political parties get ample time to verify and study these lists for any further modification if required.

Referring to voter identification cards, Dr. Jitendra Singh reminded the administration that it is not mere a voter card but as per the statutes of Indian Constitution, voter card is notified as one of the identity  proofs for every citizen of India like other  identity proofs such as passport, driving licence etc. Therefore, even partly incorrect information in voter card could land the citizen in trouble while undergoing a security check and could also be challenged in court of law.

Dr. Jitendra Singh said that the BJP has right from the beginning already  taken several other exceptions to the local bodies elections and demanded implementation of 74th Amendment of Constitution if the government is sincerely committed to the genuine  empowerment of local bodies. Not only this, the party has also pointed out discrimination in increasing the number of wards of Srinagar Municipal Corporation to 75 but leaving the number of wards in Jammu Municipal Corporation unchanged, he added.

Flanked by former Mayor Kavinder Gupta and BJP Jammu Distt. President Rajesh Gupta, Dr. Jitendra Singh displayed fallacious voting lists to camera men and said the people need to be made aware of the fraud being played on them.