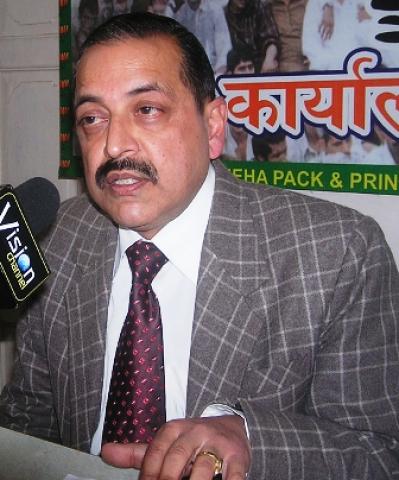 He said that at a time when the BJP’s central leadership had taken up the matter with Manmohan Singh government, it smacked of high-handedness on the part of Home Minister to endorse the treatment meted out to Arun Jaitley, Sushma Swaraj and Anant Kumar.

The BJP is seriously worried about the Union Home Minister’s frequent instigatory initiatives which have time and again tended to demoralize the nationalistic  and patriotic forces in the state and provided encouragement to separatists, Dr. Jitendra Singh said. It seems as though Chidambarm has forsaken his constitutional duties to uphold the sovereignty of the Indian republic and is instead contributing to further loosening of the relationship bond of state of with the rest of .

Stating that there was a clear case of unholy patronage flowing in from 10 Janpath for the continuance of a separatist friendly regime in Jammu & Kashmir, Dr. Singh said the BJP leadership views “Azadi”, “Autonomy” and “self-rule” as part of the same separatist spectrum.

Also taking strong exception to government’s attitude in cancelling BJP rally at Parade Ground on January 25 on the pretext of section-144 imposed in interest of law & order,  Dr. Singh asked whether the law & order situation had in any way changed to the extent that two public rallies by the Congress party were permitted to be organised on January 31. This only indicates the party politics motivating decisional in the administration.