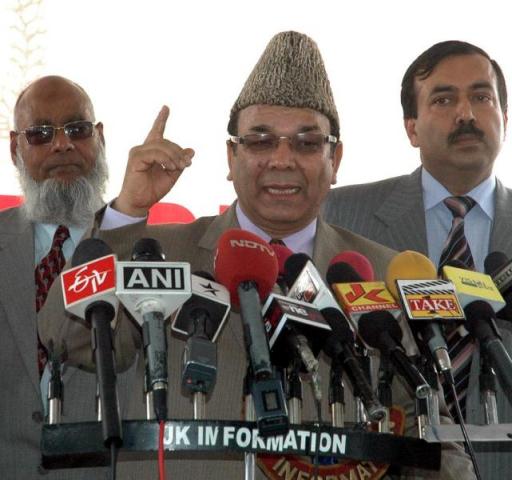 , March 12 (Scoop News)-  J&K Minister for Finance,  Abdul Rahim Rather today said the Budget 2010-11 lays thrust on agriculture and allied sectors. He said the State Government has requested the Centre to make the Cross LoC trade easier and in this connection telephone connectivity across LoC is being restored.

Detailing the highlights of the Budget,  Rather said in an interaction with the media persons outside the Legislative Complex immediately after presenting the Budget 2010-11 in the Legislative Assembly this morning, that the agriculture sector has witnessed slump in the State during the past 30 years and its share in Gross State Domestic Project has dipped to 25% from 47% during the eighties. He described agriculture as a primary occupation which, provides employment opportunities to around 70% of the population and said that it has been thought proper to provide incentives to various activities in the sector.

The Minister said for the first time he has taken the initiative of introducing gender budgeting. He said the Women’s Development Corporation has been provided a grant of Rs. 10 crore at very low interest rates for helping the deserving women. He said 3000 more Anganwari Centres would be opened and a Rs. 300 monthly raise in their salaries have been suggested.

To give tourism a boost, the Minister said that hotels and lodges have been given tax exemption for the next year. He said a similar exemption has been extended to Industrial Sector for the next year after which a uniform and broad tax regime would be introduced throughout the country.

The Minister said Rs. 113 crore have been earmarked for Sher-i-Kashmir Employment Policy and Skill Development Institute would be set up at every district headquarters. He said about 20,000 youth have been absorbed in Government jobs and another 20,000 employment opportunities are also being made available.  He said the 13th Finance Commission has doubled its award to the State for which he thanked the Commission.

On the efforts of the Government to improve Cross LoC trade, the Minister said on the request made by the State Government, the Centre has agreed to restore five telephone links across LoC for making the trade transactions smoother and simpler. He said the State Government is requesting the Centre for making the trade easier and basic infrastructure in this regard is being developed. He said the quantum of trade across LoC is also increasing.

Earlier Finance Minister,  Abdul Rahim Rather today presented the second budget of the coalition Government headed by Chief Minister,  Omar Abdullah, in the Legislative Assembly, this morning. In his 120 minute speech, the Minister dwelt in detail on different aspects of the Budget.

Starting with fiscal 2007-08, an amount of Rs. 4 crore is being provided every year for settling outstanding of JAKFED towards JCCB crystallized at Rs. 80 crore.

Besides Rs. 128 crore for maintenance under non-plan, Rs. 20 crore under Plan also for Flood Protection and R&B Sector.

Rs. 75 crore in Plan for implementation of Sher-e-Kashmir Employment & Welfare Programme for Youths.

For bringing greater transparency and accountability in implementation of development programme, 150 projects worth Rs. 744 crore assigned to NABCONS and M/S Mckenzy.

Rs. 60 crore for meeting cost of VRS/GHS in PSUs.

Provision of Rs. 2051 crore for purchase of power from CPSUs and J&K SPDC.

Completion of all ongoing Health and Educational institutions and making these fully operational by end 2010-11 a major thrust area under Plan.

Rs. 20 crore for reactivation of worn out and procurement of new water supply pumps.