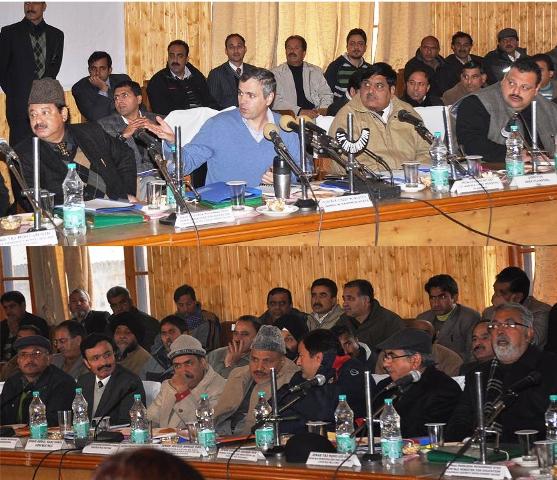 Baramulla/Srinagar, December 13 (Scoop News) – J&K Chief Minister, Omar Abdullah today advised all the heads of departments and district heads to establish a close rapport with the people so that their grievances are redressed on the spot. He stressed for conducting tours to their respective jurisdiction to get feedback regarding the projects adding that coordination and better people-administration links yield better results on the ground.

Omar Abdullah was speaking in today’s board meeting of Baramulla. Appreciating the endeavours of district administration for pooling all sources to meet the developmental targets in Baramulla district in spite of temporary thaw due to disturbances, the Chief Minister,  Omar Abdullah hoped by working with added efficiency, dedication and making good use of the present weather conditions, all the targets would be achieved. He also announced additionality of Rs. 3 crore for the district which would be in addition to Rs. 98.51 crore already earmarked for the annual district plan.

Omar Abdullah said that it is significant that one opposition MLA, Sangrama,  Basharat Bukhari has also put in record that developmental activities in the district remained apace particularly essential services like CA&PD, PHE, Power, Education, health, Rural Development. He said these departments continued their services to provide basic developmental and welfare facilities to the people of the district. The Chief Minister said that R&B department executed macadamization of roads throughout the valley during the recent turmoil which is worth to be noticed. He said that Deputy Commissioner, Udhampur informed him that 68 percent expenditure has been booked so far in the district while Baramulla district has registered over 50 percent expenditure which indicates a little difference between the two districts because of four months unrest in the valley. Now, he said officers have to work hard to fill this gap.

He said that powers for re-appropriation of funds have be delegated to the chairmen of the district development boards adding that all the chairmen will conduct review of their respective districts in January 2011. He emphasised that special attention needs to be given to SKEWPY so that maximum youth are benefit through this package.

The Chief Minister directed the PDD authorities to properly stick to the power schedule so that people do not confront any inconvenience. The people, he said, should be made fully aware regarding the specific hours of load shedding and ensure that power remains available to the people without any disturbance.

The Minister for Education, Peerzada Mohammad Sayeed who is also the chairman of District Development Board, Baramulla said that under the dynamic leadership of  Omar Abdullah, the district Baramulla could continue its projects and welfare schemes despite the unrest in the valley. He assured the Chief Minister that targets fixed for the current fiscal would be achieved in full.

Earlier, the MLA’s and MLC projected their demands with regard to their respective constituencies.

Earlier, the District Development Commissioner, Baramulla,  Bashir Ahmad Bhat gave sector wise achievements registered so far in the district. He said that under R&B, 740kms have been black topped while 76 kms have been macadamised in the district so far. The meeting was informed that the length of the total surfaced road is 1866 kms while Rs. 50 lakh have been expended on the upgradation of the Sopore road so far. While referring PHE to sector, he informed that Rs. 297.17 lakh against the Rs. 879.50 lakh have been incurred till date under NABARD/LIC. He said that out of ongoing 23 schemes, 12 schemes falling under district sector. The DDC further said that under ARWSP Rs. 826.76 lakh have been incurred so far on various schemes and this year six schemes will be completed by which 297663 souls will get benefitted.