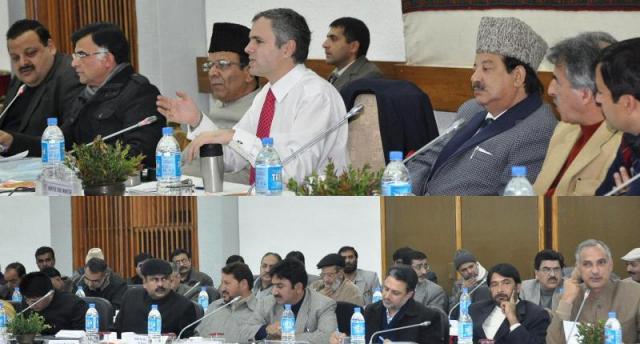 Srinagar/Anantnag, December 21 (Scoop News)   – – While complimenting people of Anantnag and district administration for their keen devotion towards developmental activities which have resulted into  record 59 percent utilisation of funds in various developmental sectors, Chief Minister,  Omar Abdullah announced additionalities to the extent of about Rs. 5.59 crore for the district.

Earlier, Minister for Finance and Ladakh Affairs,  Abdul Rahim Rather said that inspite of turmoil and abnormal situation this year, at the end of November 2010, an expenditure of 59 percent of the total availability on various activities was booked as compared to last year’s corresponding period, which is a clear proof of the fact that our development activities continued to function during turmoil as well despite occasional impediments.

The Chief Minister reviewed developmental activities of each department which they carried on in Anantnag, Devsar, Pahalgam, Humshalibugh, Shangus, Kokernag and Dooru.

MLAs and MLCs informed the Chief Minister about their demands for the development and welfare of their respective constituencies. The demands highlighted by them include augmentation of grid stations, trauma hospital at Bijbehara, upgradation of roads, water supply, overhead bridges at Khannabal and Qazigund, upgradation of receiving station, extension of Akad Park, street lighting, Seer-Hapatnar-Ashmuqam road, construction of bridges, upgradation of sub-centres and PHCs, footbridges, land compensation, laying of LT/HT transmission lines, beautification of Shrines under Pilgrim Tourism, functioning of Sher-i-Kashmir Research Centre, Pahalgam, posting of medical staff, relocation of Achabal Adda, functioning of Industrial Estate Vesu, renovation of Malakhnag, construction of circular road, Anantnag etc.

The Chief Minister underscored that a comprehensive view will be taken to enrich HT/LT power lines throughout the state and converge the enrichment of these distribution lines with other power development projects which is priority operation. He also announced Rs. 1.50 crore for the district to improve this system and Rs. One crore was kept at the disposal of DDC as untied grant to meet various demands which comes to his notice in awami darbars.

The Chief Minister after giving patient hearing to the demands of the MLAs and MLCs for about four hours, announced additionalities for various works. An amount of Rs. 50 lakh were sanctioned for meeting hall Khanabal, Rs. 70 lakh for self employment scheme as margin money, Rs. 26 lakh for renovation of Gujjar and Bakerwal hostel, Rs. 23 lakh for Ashajipora-Mirbazar road, Rs. 18 lakh for Sedura road. Rs. 12 lakh for PHE schemes, Rs. 1.20 crore for land acquisition for trauma hospital Bijbehara, Rs. 13 lakh for Dak Bungalow Dooru, Rs. 25 lakh for street lighting in Shangus and Rs. 25 lakh for Sports stadia.

Earlier, the DDC Anantnag,  S. Jaipal Singh presented the achievements registered under various sectors in the district. He said that an amount of Rs. 45.35 crore were spent on these works constituting 59 percent expenditure of the total availability.