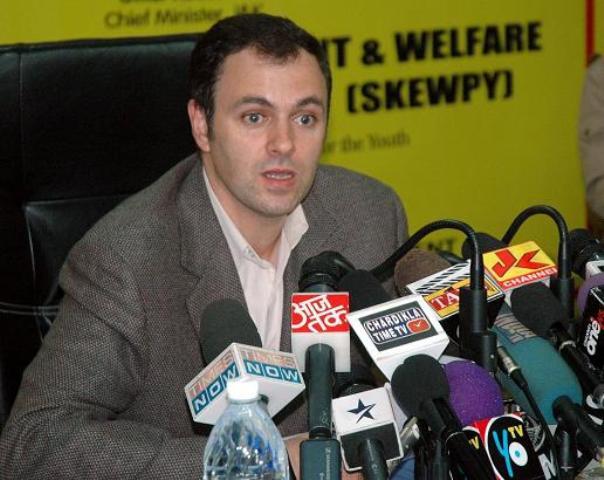 All the members of Council of Ministers, various Legislators, Chief Secretary and administrative secretaries of various departments were present on the occasion.

Abdullah said that a collective, comprehensive and holistic endeavour has been made to address the gigantic unemployment problem in a principled manner in the SKEWPY. He said about five lakh educated youth have registered as unemployed in the Employment offices and it is not possible to engage all of them in government service. However, government intends to absorb over one lakh educated youth in government service during the tenure of the government while as the rest would be provided ample opportunity under the newly launched employment programme to seek jobs in private sector and take to self-employment ventures.

Omar said that from the day first government was actively involved in getting the data, district wise, provincial wise, category wise and gender wise about the status and magnitude of unemployment in the state to prepare a comprehensive programme to address the crises. “We have come up a holistic programme in the shape of SKEWPY to address the issue and pave way for all educated youth to get opportunity of earning reasonable and honourable livelihood”, he said adding that the programme is first step in our journey to mitigate the difficulties of unemployed youth and there is always scope to improve and upgrade the things. “If the need arises government would further strengthen the programme and expand its ambit”.

Abdullah said that the Cabinet threadbare discussed the programme in the Cabinet meeting and deliberated upon all its provisions and aspects. “There was no difference of opinion among the Cabinet Ministers on its any provision as reported by a section of press”, he said adding that Cabinet was unanimous in approving the much awaited and first of its kind comprehensive employment programme in last 60 years for the youth in which proper care has been taken to accommodate the educated youth from matric to post graduate level.

Announcing the financial help to educated unemployed youth,  Omar said that instead of naming the assistance as unemployment allowance, government has found it proper to name it as Voluntary Service Allowance. He said that the allowance getting youth will have to put in a voluntary service to the society by way of rendering many helps in the field like education, health, social service etc.

The Voluntary Service Allowance envisages provision of Rs.500 to an unemployed youth with the qualification of matric per month while as it will be Rs. 550 for 10+2 unemployed youth, Rs.900 to a graduate, Rs.1100 to a post graduate and engineering and medical graduates and equivalent levels in the field of computer science, technology and education, Rs. 600 per month in respect of 10+2 with additional skill such as ITI and Rs.750 per month in case of eligible 10+2 persons with professional qualification equivalent to three year diploma from a recognized polytechnic institutions.

Omar said that government has drastically modified the self-employment policy making it purposeful, easy and highly beneficial reducing the burden of acquiring loans from the banks and providing for seed capital of Rs.3 lakh in respect of under-graduate, Rs.5 lakh in respect of graduates and Rs.7.5 lakh in respect of technically qualified prospective entrepreneurs. The state government shall also facilitate a tie up between JK EDI and financial institutions particularly J&K Bank for availability of adequate and timely credit wherever required.

Chief Minister said District Employment Exchanges have been converted in District Employment and Counseling Centres to play a dynamic role in dealing with the problem of unemployment. These DECCs will work in close co-ordination with Credit Counseling Centres being created by RBI. He said a separate State Policy on Skill Development to be framed consistent with the national policy to be executed under a State Council of Skill Development. As many as 22 rural self Employment Training Institutes will be opened through commercial banks. Of these 7 will be opened during the current financial year. Also 21 Industrials Training Institutes (ITIs) will be converted into centres of excellence with active participation of industry at a cost of Rs.67.50 crore. He said 18 polytechnics are also being opened in the state to provide training to the youth in modern trades for which there is great demand in the open market.