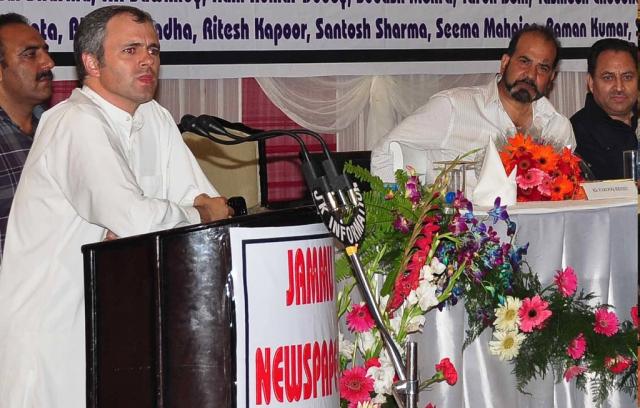 , May 25 (Scoop News) –   Asking media to play a constructive and balanced role in the society, Chief Minister,  Omar Abdullah today said that the media should exercise its freedom of expression with greater sense of transparency and responsibility as it can prove to be vital tool in transforming a civilization to a better world to live in.

The Chief Minister called upon the media fraternity to use their power and authority for welfare of the society. He asserted that media should not sensationalize and exaggerate its reports to the extent that they add fuel to fire but should be water to douse it. He said that reporting should be done with an objective to present a true picture of the situation and honest highlighting of the public issues. He also asked them to maintain credibility of their respective newspapers instead of concentrating on commercialized and material gains. He also asked them to highlight public issues in a more vibrant and audacious manner so that the grievances of the people could be mitigated to some extent.

The Chief Minister was speaking at a seminar on “Role of Media in the present scenario” organized by Jammu Newspapers Guild here.

Referring to further enhancing the standards of the media, the Chief Minister emphasized the need of introducing latest technological innovations in the machinery of print and electronic media. He said that in today’s time of globalization the media’s role has added dimensions. He said that my administration is cautious of the problems being faced by the media and the role of Information Department in maintaining cordial and good relations between media and administration were appreciated.

The Chief Minister exhorted upon the media fraternity to be impartial while reporting about any incident irrespective of political and other affiliations as they are the only medium through which a society or nation can get information about the happenings of their surroundings.

President of the Jammu Newspapers Guild,  A. K. Sawhney while welcoming the dignitaries presented the problems being faced by media fraternity and urged the media men to extend wholehearted support to the development initiatives of the government vis-à-vis public grievances.

Responding to various demands and problems highlighted by the some prominent media personalities, the Chief Minister assured that these will be looked into and mitigated at an appropriate level.