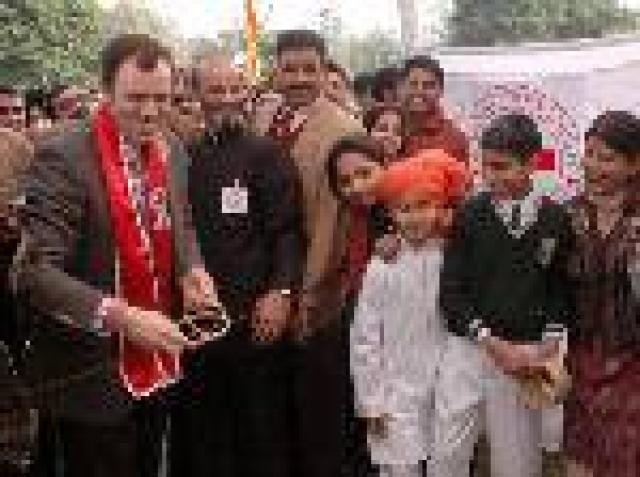 Jammu, February 7 (– Complementing Indian Red Cross Society for its valuable service to the needy, the Chief Minister of Jammu and Kashmir, Omar Abdullah announced a donation of Rs. one lakh to the Society and called for contributing towards the noble cause.

Interacting with media persons after declaring open the Red Cross Mela-cum-Raffle Draw at Kala Kendra, here on Saturday,  Omar said that by organizing such melas, awareness about Red Cross can be propagated and youth inspired to be members of the Red Cross Society.

The Chief Minister said that he remembers the days of his childhood when late Madr-e-Meharban, Begum Abdullah and the then Lady Governor, Mrs. L. K. Jha used to organize Red Cross awareness camps and melas to motivate the people to be participants in the noble cause of helping poor and needy. “I used to visit these camps and melas with my grandmother to know about the activities of the Red Cross”, he added.

The two-day Red Cross Mela-cum-Raffle Draw has been organized by Indian Red Cross Society, in collaboration with Jammu and Kashmir Bank and other business organizations. As many as 50 stalls have been set up in the mela which include the stalls from various Government departments and NGOs. The Army, Air Force, CRPF, BSF and Police have also set up their stalls in the mela.

The Chief Minister visited various stalls and interacted with stall holders and students who manned these. He showed keen interest in the products exhibited at the stalls.

The general public, especially students, visiting the stall show their interest in knowing about the Air Force in the times of war and peace. The stall named “Touch the Sky with Glory” provides detailed information to the visitors about the Indian Air Force. Information about the career opportunities in the Air Force is also being provided to the visitors. The stall also provides visual appraisal of the Indian Air Force, the 4th largest air force in the world. Omar Abdullah also visited the stall and interacted with Air Force personnel.