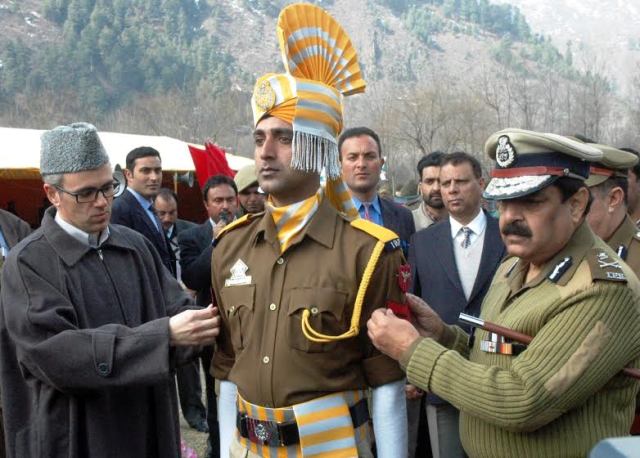 Sheeri(Baramulla), February 24, (Scoop News)-Appreciating the role of Jammu and Kashmir Police in the process of restoring peace and normality in the State, Chief Minister, Omar Abdullah Monday said that the security forces and J&K Police rendered a commendable job in improving the law and order and security situation in the State adding that the will of the people for peace and tranquillity is equally worthy of all credit.
Addressing the Passing-out J&K Police Cadets at STC Sheeri this morning, the Chief Minister expressed the hope that the Police and security forces would make holding of ensuing Parliament and State Assembly elections smooth and safe as they did in 2008 elections.
“You have to undergo two tests of ensuring safe and secure elections during the current year and I am confident that you will render stupendous service in this regard as has been your tradition”, he told the J&K Police and congratulated the 789 passing out cadets for completing their training successfully.
The Chief Minister said that police-people close liaison in maintaining normalcy and helping create peaceful conditions for economic welfare, employment generation and holistic development of the State is imperative. He said the friendly approach by the police towards civilian and helping them in the hour of need would propagate and inculcate the dignity and love for personnel in the hearts of general people.
Omar Abdullah asked the police force to always exhibit human face while dealing with challenges on the security and law and order maintenance fronts. “You have to deal with different situations including militancy related incidents. You should always render your service keeping in mind the safety and security of innocent civilian”, he said and added that every step should be ensured to evade collateral damage to life and property while combating militancy related incidents.
The Chief Minister said that with the rooting of peace and restoration of complete tranquillity in the State, the police force’s attention would shift from militancy related violence to the normal policing. He expressed the hope that the cadets will render commendable service to the State and will live up to the oath they have taken to serve the people and the State.
The Chief Minister said that government would provide all help for strengthening the State police force and ensuring the welfare of its personnel besides taking care of the families of police martyrs. He said whatever facilities required to be upgraded in various Police Training Centres in the State would improved.
Director General Police, Ashok Prasad also spoke on the occasion while the Principal of the STC Sheeri, Fareed Ahmad Khan presented the status of functioning of the training centre. Additional Director General Police, S. M. Sahai was present on the occasion besides other top rank Police Officers.
The 12h batch-BRTC of STC Sheeri comprising 789 recruits deputed from various districts and having taken their final examination, are ready to serve the society. During the training the trainees were imparted physical training for drill with arms and without arms, right control, counter insurgency, use of different weapons, jungle trainings, and mountaineering etc. they have also been imparted legal knowledge of Ranbir Panel Code, Criminal Procedure Code, LSL, Police Rules etc.
In addition the trainees have been given training in computer application, disaster management, AIDs awareness programme and human rights.
The Chief Minister on the occasion presented awards to the best cadets showing outstanding performance in different categories. Those who received awards on the occasion included Dilshad Hussain, Varinder Kumar and Abdul Majid while Riyaz Ahmad was given one rank promotion for securing first position.
MORE AT http://scoopnews.in/det.aspx?q=36030