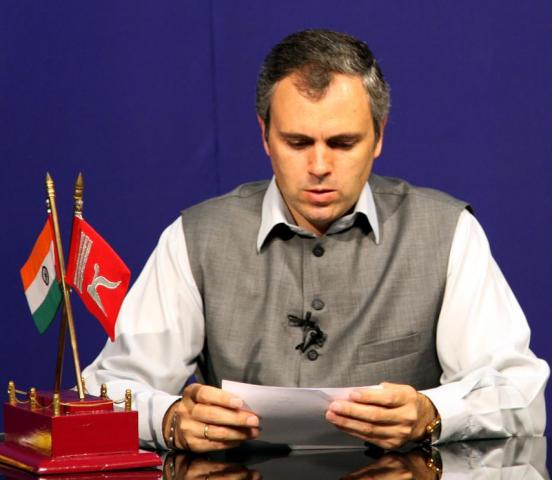 Srinagar, August 14 (Scoop News) Expressing deep grief and sorrow over the loss of lives during recent happenings in the valley, Chief Minister conveyed heart-felt condolences and solidarity with the bereaved families.

“My heart bleeds and in their hour of grief I am with the bereaved families whose dear ones have lost their lives. The victims of the unfortunate events are my own brothers and sons and I am in gloom and bereavement”, he said adding that nobody can be so stone hearted as not to be touched by such happenings and no eye can be without tears over the loss of lives.

The Chief Minister also expressed grief over the loss of lives in the recent cloudburst in Leh and said that Government would take every step for the rehabilitation of affected families and restoration of public service infrastructure.

Omar said no economic or employment packages can heal the wounds, but economic development is also an essential component of the well being of the state and its people and so cannot be ignored. He announced that 50,000 youth will be engaged by the government within the next few months. “While Prime Minister has constituted C. Rangarajan committee to address the employment problem in , on the occasion of the holy days of Ramdhan, I announce that the state government will engage 50,000 youth in the government within the next few months to improve the public delivery system in public services.

In his address to the people on the eve of the Independence Day to be telecast and broadcast from Doordarshan and Radio Kashmir on August 15, 2010, Omar said that right from the day he took over as the Chief Minister of Jammu and Kashmir, he has focused on enhancing the employability and expanding the orbit of employment for the youth of the state. He said that during the last 18 months, his Government besides focusing on pani, bijlee, sarak, sehat and taleem as the most five important sectors of economic welfare, has laid emphasis on providing solution to the unemployment issue.

Omar welcomed the Prime Minister’s announcement in the All Party Conference regarding the restoration of autonomy to the , adding that this would help to remove the trust deficit that has crept in due to its erosion. He also welcomed the Government of India’s recognition of the fact that the accession of to had taken place under unique circumstances. “This is a historic opportunity for us and we must take advantage of it”, he said and appealed to the separatist leaders to come to the table for talks and play their role in solving the issue”, he maintained.

The Chief Minister said “the people in have cynicism about the promises made by the Government of India in the past.  And so a need for the Central Government to initiate action to remove all doubts from the minds of the people and bridge the gap that has emerged over the last six decades. I think by restoring the autonomy this trust deficit will be removed. I request the Government of India to take urgent measures in this regard”.

On AFSPA, Omar said that he is the first Chief Minister who raised this issue in the State Assembly and repeatedly advocated its revocation. “I have stressed on its amendment time and again and I am happy that the Union Government has recognized the necessity of revisiting AFSPA. While we have also to work towards this direction I appeal to the Central Government to take concrete steps for revoking this Act”, he said.

Omar said that it was he who made it clear in the presence of Prime Minister and UPA Chairperson, at the inauguration of railway line at Anantnag that ‘ is a political issue and it should be addressed politically’. “while expressing thanks to the Central Government for the liberal economic support I said that the political genesis of issue cannot be addressed by economic package”. Omar said that he is advocating this aspect of the problem time and again and will continue to do so at each fora in the future as well. He said that ever since he has taken over as the Chief Minister of the State ‘I have been advocating the necessity of sustained internal and external dialogue processes. I am a votary of a sustained meaningful dialogue between and and and different shades of opinion within the state in a bid to restore tranquility and peace in the state’.

Omar said the state has witnessed a saga of uncertainty, violence and disturbance during the last 60 years without achieving anything. “It is the time for everyone to help to work together for restoration of dialogue channels and make necessary headway on the road to resolve the political issues. He said continuous hartals and stone pelting is not going to solve any issue. “Such practices only add to the miseries of people, mar the education of students and snatch bread earning opportunity for the small traders, shopkeepers, transporters and labourers”, he said.

The Chief Minister appealed to the people in general and youth in particular to help in restoring normalcy and calm, he said that he believes in the politics of principles, truthfulness, forthrightness and straightforwardness and shall continue to do so irrespective of the consequences. He said hypocrisy is not his trait and he has never indulged in it. “I am not for power politics, I am for a principled politics and politics for the people of my state. Nothing is dearer to me than my people. I am here on this chair because of your support and trust. I will never let you down. I will stand for you and for your welfare ever”, he asserted.