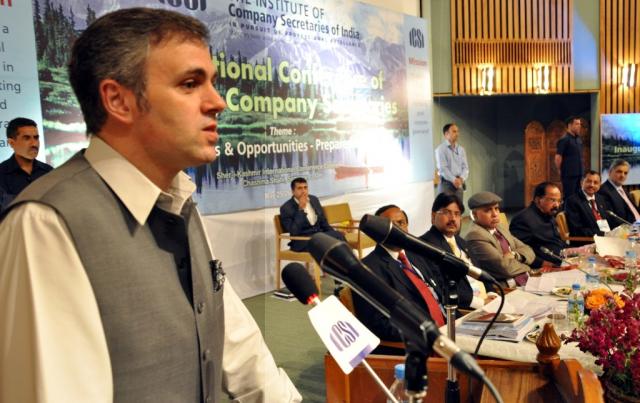 Addressing the 13th National Conference of Practicing Company Secretaries at SKICC here this morning, the Chief Minister highlighted the role of this fraternity to factor in the strong ethics, lawfulness and best practice in the functioning of corporate sector making it law abiding and disciplined.

“Indian economy is not unique were we see weak ethics and unlawful practices but this element is also observed in strong economies of the world”, he said adding that guarding risks at the cost of law and ethics and adopting unsound business need to be clamped down and Company Secretaries have to play their important role in this direction.

The Chief Minister said that Indian business industry is capable of dealing with risks and surviving the changes. “We have seen the removal of quantitative restriction on imports has not hampered the growth and development of indigenous industry but gave further strength to it and helped its growth and marketability to a degree of satisfaction”, he said citing examples of various industrial houses which not only increased the production but enhanced their markets internationally.

Omar Abdullah said that circumventing risks unethically and avoiding lawful course in business conduct is in no way helpful to the growth and development of industry on sound basis. He said this matter has attained enormous importance in the present day scenario of world trade and business facing various challenges. He stressed on abiding by the provisions of law by the industrial houses and doing business under ethical parameters. He said that this aspect requires focused attention.

On the growth and development of industries in Jammu and Kashmir, Omar Abdullah said that the geographical constraints and distance from the raw material though makes the State especially Valley in disadvantageous position for heavy and large industries, yet this part of the country is highly feasible with greater potential for agro-based and IT related industries. “We have a great potential in MSME sector and government is focusing on its development to provide jobs to the unemployed youth of the State on a greater spectrum”, he added.

On the growth and performance of Jammu and Kashmir Bank, the Chief Minister lauded the management of the Bank headed by its present Chairman, Mushtaq Ahmad for showing remarkable headway even under challenging circumstances and pressures on the growth of economy world over. “This (J&K Bank) is the only company of the State trading at share market and showing positive growth and development”, he said and expressed the hope that the Bank would touch new highs in the coming years.

Calling for erasing negative perception from the minds of Indian people regarding visiting Valley sought the hand of Company Secretaries from all over the country participating in 2-day National Conference here, to carry the message of normalcy, hospitality and openness to trade and travel from this place to the people outside.

“You have to act our messengers to tell the people in the Country about the normalcy rooting fast in the State and the openness of the society for business and tourism”, he told the Company Secretaries adding that hospitality of the people from here require your special mentioning at your places.

Speaking on the occasion, Union Minister for Corporate Affairs, M. Veerappa Moily appreciated the dynamism and leadership of Omar Abdullah in steering the State out of difficulties and putting it on road to peace and prosperity.

“All are proud of seeing State doing excellent under your dynamic and young leadership”, Veerappa Moily eulogised Omar Abdullah and said that the beauty of the Valley is enchanting and giving solace to eyes. He said that observing normalcy, peace and development here is all the more consoling. He lauded the efficient, vibrant governance of the Omar Abdullah led dispensation and praised the resilience of the people of Jammu and Kashmir for rejuvenating peace, development and economic welfare.

“I salute the people of this place for their intelligence, acumen and ability to address the difficulties, deal with challenging situations and make way through all odds towards success”, he said adding that the human resource present in the State is brilliant and one of the best in the country. “The young persons of the State have shown their mettle in various civil service and national level examinations”, he said adding that the practicing company secretary-ship discipline would provide them befitting platform to excel in this field and lead the society and the country in the industrial sector.

Identifying agriculture, horticulture, IT, food processing, cultivation of cash crops and similar sectors as core area for launch of industries in the State, the Union Minister said that MSME sector offers all the more promises for the growth and development of Jammu and Kashmir economy. “This is the sector which can provide large scale self employment to the youth of which constitutes about 70 percent of the population in the State”, he said.

He suggested organizing of 10-Member Producers’ Companies by farmers, artisans, horticulturists and others associated in agriculture and allied sectors to yield business and get benefited under the provisions of Company Act. He said a new Company Act is under preparation which would enhance the role of company secretaries in the development of disciplined industries in the Country. “A new Company Bill is in offing”, he said adding that it would be a comprehensive legislation to encourage and strengthen the cooperated sector.

Dr. Veerappa Moily appreciated Jammu and Kashmir Bank for showing remarkable growth and business even during the situation when there was tremendous pressure on economy throughout the World. He said that the registering 22 percent growth and 33 percent profit by the J&K Bank during the last year when the business and profit of all Banks in the Country declined is worth showcasing across . He showered praises on the management of the Bank under the guidance and leadership of its present Chairman, Mushtaq Ahmad for this performance.

The Conference will deliberate in its 2-day session on the vision theme of ‘Emerging trends and opportunity – preparedness for PCS with special reference to socio-economic development of ’. The vision of ICSI is ‘to be a global leader in promoting good corporate governance’ and its mission is ‘to develop high calibre professionals facilitating good corporate governance’.