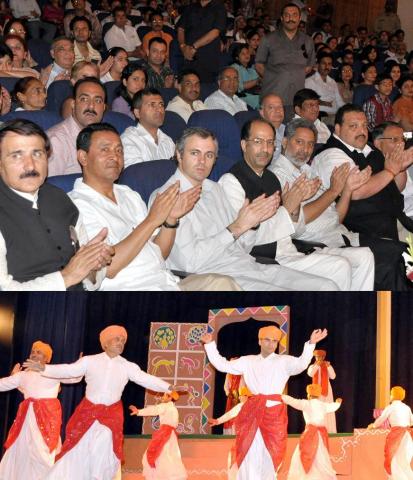 Jammu, April 14 (Scoop News) –Asserting that dialogue has no alternative to settle issues, Chief Minister; Omar Abdullah Thursday said that if Cricket diplomacy helps in giving forward push to talks between India and Pakistan, he is in favour of it.

Speaking to media on the sidelines of a function of Tourism Department at Zorawar Singh Auditorium here, the Chief Minister said that violence will never resolve any issue.

“Unless somebody shows me any credible alternative to the dialogue these talks will always matter. Too much time has been spent in violence and in not talking to each other”, he said and emphasized the need for sustained dialogue.

“Any matter between and whether it is , Saichin, Sir-creak or trade, violence will not solve these issues. It is the sustained dialogue which will solve them and if cricket diplomacy or any other diplomacy helps the process then I am all for it”, he said.

In reply to another question, the Chief Minister said that our endeavour is to expand the orbit of internal dialogue process and those who are ready for talks they would be provided full security.

In reply to another question, the Chief Minister said that JK Police is investigating in the assassination of Moulana Showkat Ahmad Shah and said “it is an ongoing investigation and it will not be appropriate for me at this time to share any matter with you. Police is examining all leads and all evidences available and we hope to be able to track down the killers”.

The artists personified the concept and theme of cultural diversity of , and Ladakh in most artistic manner and received repeated applauses for flawless performance.

The 3-day Baisakhi festival showcasing the State’s diverse cultural heritage and propagating the unity in diversity through the medium of culture and art was organized by the State Department of Tourism in collaboration with the Natrang Theatre. Today’s mega show concluded the festival in a memorable manner.

Balwant Thakur on the occasion thanked Chief Minister, Omar Abdullah and other dignitaries for witnessing the show and encouraging the artists.

He said the possesses rich cultural heritage which requires strengthening and propagation through a unified approach.