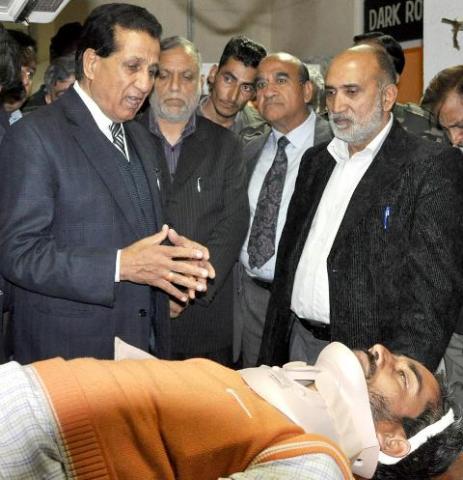 Jammu, December 01 (Scoop News) –  J&K  Chief Minister, Omar Abdullah has expressed deep sorrow over the loss of lives in a road accident that took place at Khadkala on Kalakot road in Rojuri district. As per reports, six persons have lost their lives while 46 received injuries in the accident.

Omar Abdullah conveyed sympathy to the bereaved families and directed the administration for prompt medical treatment to the injured.

The Chief Minister also directed the district administration for urgent relief to the affected families.

Minister for  Medical Education, Youth Service and Sports,  R.S. Chib  today visited to enquire about the welfare of injured persons, who met a vehicular accident at Kharagala- Kalakote today.

The incident claimed several lives besides injuring some others.  Out of 14 injured persons admitted in GMC, , one injured girl Sonia D/O Rajinder Kumar succumbed to the injuries.

Chib directed the authorities to provide all possible medical assistance to the injured for their speedy recovery. He issued special instruction to the doctors on duty to extend special care towards a young boy Mohammad Yasin of 15 years age, who was very serious and put on ventilator. He directed that incase the boy needs to be referred for special treatment  outside the State, necessary steps should be taken for the same.

The Minister announced financial assistance of Rs.5000 to each injured in the mishap. He also directed for providing free diet, transport and stay for attendants accompanying the injured.

Chib expressed sympathies with the bereaved families and prayed for early recovery of the injured. He prayed for eternal peace to the departed souls.

In a tragic road mishap six passengers were killed while forty six others were wounded some of them critically, when a passenger Matador in which  they were travelling   skidded off the road and fell into a gorge at Khadghala   Kalakote  of Rajouri district  early this morning.

Police said that the ill-fated Mini bus bearing registration No. JK06/0495  was on its way to Kalakote  from Tata Pani .  On receipt of the information Police rushed the spot, launched rescue operation immediately. The occupants of the vehicle have been evacuated and rushed to district hospital Rajouri were two persons were declared as brought dead, three succumbed their injuries while being shifted to hospital and one lady later expired while being airlifted to GMC Jammu taking the death toll to six persons.

The rest injured are admitted in Sunderbani /DH Rajouri hospitals respectively and their condition is stated to be stable. In this regard case FIR NO. 63/2010 U/S 304 RPC have been registered in PS Kalakote.

The driver and the cleaner of the vehicle have been arrested by the Police. The Inspector General of Police  A.K.Gupta has already given instructions to all the district SSsP to ensure that the repeat offenders in road traffic accidents are booked under the stringent provisions of Law i.e 304 RPC and also to investigate the role of owners of the commercial vehicles as regards their culpability in such cases where precious human lives are lost.