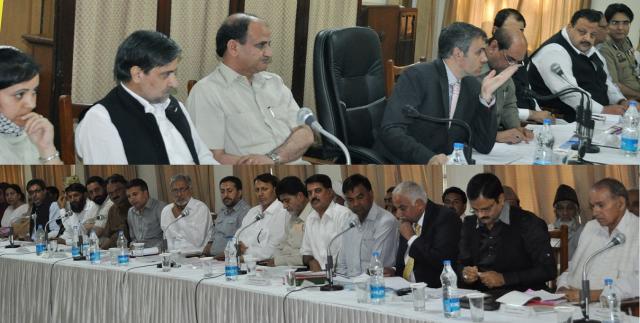 Jammu, April 12 (Scoop News) Reviewing the progress of Sub-Plan at the 33rd meeting of State Advisory Board for the Development of Gujjar and Bakerwal here on Thursday, Chief Minister, Omar Abdullah directed for finalizing the Sub-Plan along with the formulation of District Development Plans to ensure timely receipt of funds from the Centre Government.

The Chief Minister also directed the Planning and Development Department to earmark funds for the initiation of works under the Sub-Plan at the beginning of the fiscal to ensure launch of works well within the time limit. “The amount thus earmarked can be subsequently appropriated and adjusted when the funds are received from the Centre Government”, he said and added that this action is required for timeline completion of schemes and to ensure benefits percolate to the people positively.

Omar Abdullah said that development of Gujjar and Bakerwal community along with other weaker sections of the society is the priority concern of the government. He said the schemes aided by the Centre Government in this regard need to be taken best advantage and funds utilized to obtain desired results.

The Chief Minister reviewed the action taken report on the decisions taken in the last Board meeting and impressed upon the Administrative Secretaries to regularly monitor the implementation of decisions on ground so that benefits reach to the people promptly.

At the outset, the Vice Chairman Gujjar and Bakerwal Advisory Board, B. A. Naaz expressed gratitude to the Chief Minister for his keen interest in the development of weaker sections of the society.

He pinpointed areas requiring focused attention of the government for addressing demands of Gujjar and Bakerwal community. He lauded the Chief Minister for approving three girls and two boys-hostels for the students of the community during last year. He also thanked the Chief Minister for providing funds for managing the affairs of 16 Gujjar and Bakerwal hostels functioning in the State at present.

In a PowerPoint presentation the Secretary Board, Abdul Lateef Puswal presented resume of the functioning of the Board and the progress achieved on various development schemes.