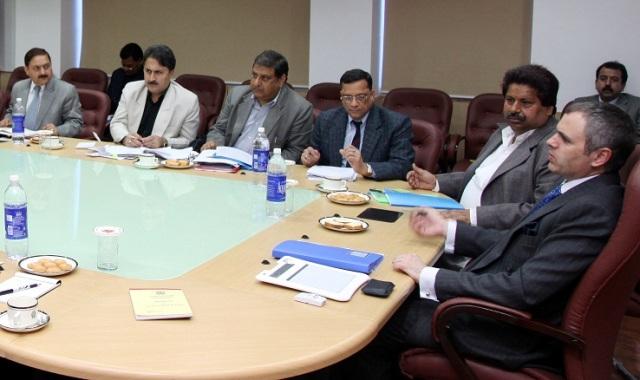 “There is need to make the functioning of the department hassle-free and transparent”, he said and flagged Revenue Department as one of the most important departments of public dealing.

Omar said the Revenue Department’s role as a custodian of land records and a dependable data bank is of significant substance and its functioning has direct bearing on the general public especially agriculturists.

Taking appraisal of the modernization and infrastructure development road map of Revenue Department at a high level meeting here, the Chief Minister approved mobility plan for all Tehsildars in the State.

Giving nod to the creation of staff and procurement of vehicles for Tehsildars to make them mobile, Omar said that tehsils all across the State should be compact units to oversee the functioning of each Patwar Halqa and help in improving and upgrading the public service delivery of the department.

In his speech, the Revenue Minister underscored the need for providing up to the mark infrastructure to the department to help maintain records in a meticulous manner and safeguard the interests of general public.

“There is immediate need of constructing up to the mark record rooms, computerize the revenue records and upgrade the service delivery mechanism”, he said enumerating the measures Revenue Department has envisaged in this direction.

Bhalla highlighted the requirement of strengthening Niabats making them more efficient and modern to deal with public matters and help in building essential data for all round development of the State.

The Revenue Minister also narrated the department’s headway on settlement operation adding that after de-notifying the villages completed under settlement, the operation will begin in other areas.

Bhalla also underscored the need for enhancing remuneration of Numberdars and Chowkidars describing them basic personnel in revenue realization and bringing about awareness about socio-economic schemes under implementation in the State.

In an elaborative PowerPoint presentation, the Financial Commissioner Revenue, Pramod Jain explained all aspects of upgradation and infrastructural development road map prepared by the department for next five years. He also gave a brief about the functionaries of the department at various levels and the nature of their functioning.

Jain unveiled the salient features of Rs. 273 crore upgradation and modernization plan prepared by the department for next five years. This includes construction and upgradation of SDM and Tehsil offices, Niabats, Modern Record Rooms, Patwarkhanas, Modernization of Revenue offices, Safeguarding the Revenue Records, Procurement of Vehicles, Creation of Staff, Settlement Operation, Enhancement in Remuneration Charges of Numberdars and Chowkidars, Setting up of Computer Centres at Niabats and main components of infrastructural development plan for the Revenue Department.

Jain gave detailed background of Revenue Department and highlighted its role in revenue collection and land management. He underlined the need for its revamping and re-orientation under the present changed outlook and approach. He also highlighted the need for technological interventions and capacity building in the department to make it more public responsive.