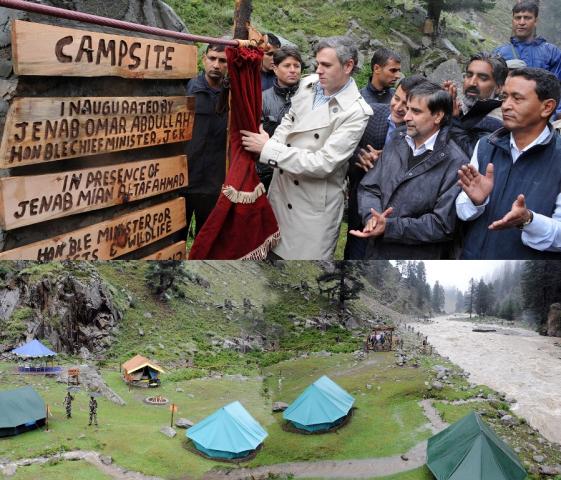 , September 09 (Scoop News) –JK Chief Minister, Omar Abdullah Sunday highlighted the importance of employing eco-tourism concept in the overall tourism development programmes to help conserve ecology and environment. He said that application of scientific methodology in developing tourist resorts inconsonance with ecological requirements is the need of the hour to sustain State’s tourism potential for next generation.

Addressing a public gathering at Dubjan after laying foundation of Eco-Tourism Village at Heerpora on Mughal Road from Shopian side, the Chief Minister said that development of eco-villages along the picturesque scenery overlapping Mughal Road would attract nature lovers and tourists in this area helping in generation of economic activities for the people.

The Chief Minister said that tourism embeds economic development and welfare of the State as such its safeguarding is the national duty of all the residents of . He said that people especially youth have to get involved at all levels in the government programmes aimed at protection and conservation of State’s bio-diversity, forests and environment.

The Chief Minister asked the people to participate in afforestation and be actively involved in safeguarding the forests of the State. He said that felling of a tree takes a minute while growing a tree takes years. “We all have to contribute in protecting our forest wealth”, he said and described forests significantly important in maintaining State’s ecology and environment.

Despite heavy downpour at Dubjan and enroute large number of people received the Chief Minister and extended their welcome to him for visiting the area and laying foundation for economic activities for the people of the backward pocket of the area.

The Chief Minister said that holistic and equitable development of all the regions and sub-regions of the area is benchmark of the governance of his government. He said that reaching out to people in all areas has been made necessary feature in the functioning of the administration.

The Chief Minister said that empowering common people to make administration answerable and ask questions to the government for its every action and performance is his endeavour and through this initiative he intends to bring in good-governance and transparency besides curbing corruption.

The Chief Minister said that the last three and a half years of his government are a success story of progress on both peace and development fronts. He said that restoration of peace has helped to carry forward development programmes on faster pace and attend the public grievances with more attention and concentration.

The Chief Minister said that his endeavour is to take peace dividend to every household and lay strong edifice for peaceful and prosperous where justice and good-governance would rule the roast.

Underlining the economic importance of , Omar Abdullah said that by completion of this road the dream of Sheikh Mohammad Abdullah to connect the Valley with Poonch and Rajouri via Shopian and open up backward pockets for economic betterment has been realized.

The Chief Minister thanked the Central Government for providing financial support to the State for construction of this road and said that the road has started percolating economic benefits to the people in this remote area.

The Eco-Tourism Village Heerpora is being developed at a cost of Rs. 70 lakhs of which Rs. 50 lakhs would be spent on infrastructure and Rs. 20 lakhs on capacity building of youth of the area for taking to tourism as a means for earning livelihood.

The Chief Minister also inaugurated Tented Colony of Wildlife at Dubjan and laid foundation of Shelter Shed at Peer Ki Gali. He also laid foundations for other forest, wildlife and tourist infrastructures in the area.