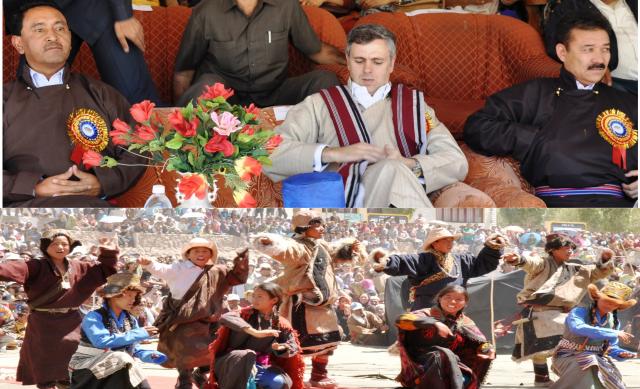 Leh,September 1 (Scoop News) – Congratulating LAHDC, Tourism Dept J&K and the people of Ladakh for the festival, J&K Chief Minister Omar Abdulla spoke high of the unmatched beauty of the region and impressed and stressed the need for its conservation. He said natural beauty and rich cultural heritage of Ladakh region attracts tourists of wide ranging interests and the preservation of the ecology and natural beauty of this area is responsibility of all.

The Minister for Tourism and Culture, Nawang Rigzin Jora and CEC LAHDC Rigzin Spalbar were present at the historical polo ground of Leh. The inaugural function was followed by a cultural procession of different troupes from every part of Ladakh region showcasing the unique and diverse cultural heritage of Ladakh on one platform.

Mr. Omar said that Ladakh Festival gives a unique opportunity to project Ladakh in its entirety for national and international tourists. He also underlined the hospitality and love of the people of this area and said that this characteristics is yet another speciality of the area to attract tourists.

On the occasion, CM assured that his govt is putting every effort to promote tourism in Ladakh making a mention of Ladakh International Film Festival, 2012 and the development of Golf course of which the foundation was laid this year.

Mr. Nawang Rigzin Jora talking about the gaining momentum of tourism in Ladakh with its number increasing every year said that Ladakh holds a great potential in enhancing the tourism sector stressing majorly on sustainable tourism that includes promoting domestic tourists. Jora informed the gathering that from next year onwards Ladakh Festival will commence from Sept 15 in order to lengthen the tourist season in Ladakh.

In view of promoting tourism in Ladakh, Jora made a mention of world’s highest green golf course of international standard at Shey that will prove an important element to fetch national and international players to Ladakh within next 2 years. He also revealed about the upcoming Trans Himalayan Culture Centre in Leh that will provide a platform to showcase the diverse culture of Ladakh including spiritual Buddhism to the tourists at one place.

The CEC LAHDC, Leh Rigzin Spallbar in his welcome address made a mention of 1.24 lacs tourists visited Ladakh by the end of August this year which is comparatively little less than last corresponding time and cited the reason of unpresendential withdrawal of King Fisher Air Service to Leh. He made it clear to the tourists that the money charged from them as environmental fees are being utilized in preserving the fragile ecology of this region. Spalbar also brought it to the notice of CM that LAHDC is contemplating for organizing a winter carnival in January with winter games and monastic festivals to attract tourists during the peak winter as well.

A cultural programme was also presented as a part of opening ceremony of Ladakh Festival 2012 and the performances of the school children of Puga Residential School left an impressive mark in the hearts of the people and CM on the spot announced a prize of Rs.1 lacs to the school.