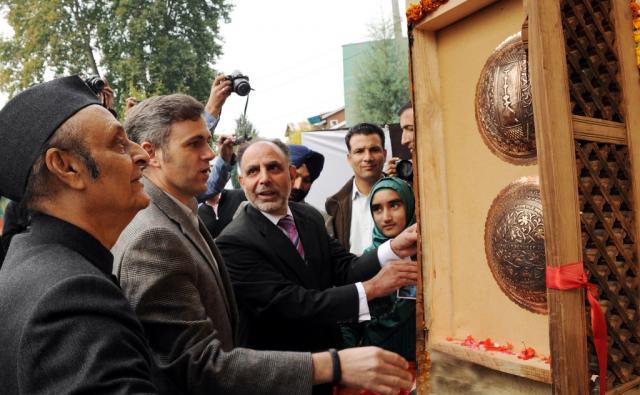 Srinagar, October 19(Scoop News) –   Highlighting the uniqueness of cultural diversity living in amity in , Chief Minister, Omar Abdullah Friday said that the abode of grate heritage, got unfortunately portrayed as a place of violence in last 20 to 25 years besmearing its image.

Addressing a function after he and Parliament Member Dr. Karan Singh inaugurated the office of Indian Centre for Cultural Relations (ICCR) at the bank of here, Omar Abdullah said that symbolizes hospitality, brotherhood, natural beauty and vastness of rich heritage. He said despite inroads and attempts to disbalance this characteristic of , it withstood all onslots and is living and emerging stronger with the passage of time.

Omar Abdullah expressed the hope that the office of ICCR in will prove highly beneficial to the artists and craftsmen here and helps promote culture and heritage in its all forms. He said that the need for such a centre in was felt for a long time and the artists were raising this demand time and again. He said that by opening of ICCR office the cherished demand has been realized. He said that the first Education Minister of , Maulana Abul Kalam Azad founded ICCR in 1950 to develop Indian cultural relations with other countries. He said that the artists of would get opportunity to showcase State’s art and culture through ICCR world-wide by becoming part of the Indian cultural troupes visiting various countries.

The Chief Minister said that the State Government is paying due attention to promote State’s culture and heritage and ensure holistic welfare of artists and artisans. He said that government has approved construction of Tehzeeb Mahal and JKPCC has been asked to start the construction work of the complex which would serve home for artists to nurture various forms of art and culture.

Speaking on the occasion, President ICCR, Dr. Karan Singh said that is abode of different religions, cultures, languages, traditions and ethnic groups. He said that the amity between various cultures and people in is the beauty of this country and ICCR showcases it all over the world. He said is itself a place of diverse heritage, culture and geographical diversity. He said ICCR would help to promote and further strengthen this identity of .

Dr. Karan Singh said that unlike other states ICCR has opened its two offices one each at and . He said ICCR would provide platform to artists to showcase their talent and develop cultural relations with the artists of other states and outside the country.

Dr. Karan Singh said that the artisans of Kashmir symbolize ’s cultural vastness and the people of this place possess richness of heritage and culture in their gens.

Minister for Culture and Tourism, Nawang Rigzin Jora in his address said that the Kashmiriyat symbolizes cultural diversity of , and Ladakh and denotes the amity and love existing between various regions and people in the State since times immoral. He expressed the hope that ICCR’s office in would help to strengthen Kashmiriyat and work for welfare of artists.

Advisor to the Chief Minister, Mubarak Gul, Minister of State for Culture, Nasir Aslam Wani, Divisional Commissioner, Kashmir, Asgar Samoon and various writers, artists and prominent citizens were present among other on the occasion.

A colourful cultural programme containing concerts from the artists of Ladakh and Kashmir was also presented on the occasion.