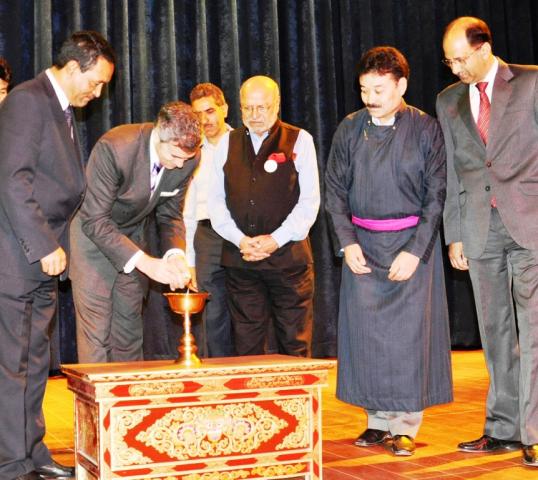 Leh (Ladakh), June 15 (Scoop News) –   The Jammu and Kashmir Chief Minister while inaugurating the International Film Festival at Leh, underscored the need for preserving ecology and conserving the natural wealth God has gifted to the State in many forms. He said the mountainous beauty, and heritage of Ladakh would always be interesting subject for film makers and global tourism.

“Our beautiful land offers wide-ranging attractions to the tourists of all interests and we have to add variety to this speciality by focusing on sports, cultural, adventure; pilgrim and heritage tourism”, he added.

Omar Abdullah asked the people of Ladakh to devote their fullest attention in maintaining and conserving the eco-system, heritage and cultural richness of the region to maintain its attraction and solace giving splendour encouraging nature lovers, adventurers and tourists of all interests to visit this beautiful part of . “You should maintain the eco-system and environment of your land to preserve it for the present and the future generations”, he emphasized and underlined this necessity in an era which is greatly threatened by climatic change and environmental degradation.

The Chief Minister said that holding of International Film Festival here will help to showcase Ladakh internationally and attract more and more tourists to this beautiful place. He expressed the hope that the festival will be of world class standard matching any high class festivals taking place internationally.

“With the coming up of excellent infrastructure in the shape of auditorium, I expect that the holding of festivals of national and international standards would become permanent feature in Leh”, he said and assured all possible help from the government in organizing events of high significance in the State to give fillip to tourism industry generating economic activities and employment for youth.

As many as 60 films on various subjects including documentary, art and feature films will be screened during the 3-day film festival to be chaired by Sham Benegal and participated by reputed film personalities from national and international cinema fraternity.