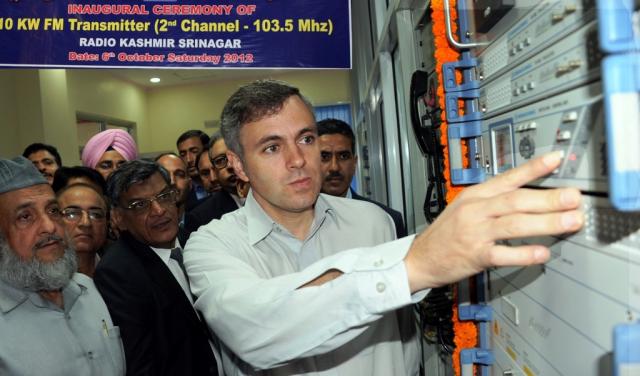 Speaking at a function after he launched 10 MW FM Channel-2 of Radio Kashmir, Srinagar here this morning, the Chief Minister referred to the difficulties faced by the two stations to run their programmes and kept people abreast with the facts during the militancy.

“You became the voice of people and worked for showing light to them in dark days”, he said and mentioned the stupendous work rendered by Radio Kashmir and Doordarshan for restoration of normalcy and peace.

Describing launch of FM Channel-2, yet another step of Radio Kashmir to enhance its reach and provide good entertainment to the people, the Chief Minister said that there is greater potential for encouraging private FM stations in the State. He expressed the hope that Radio Kashmir and Doordarshan would focus on producing more informative, educative and attractive programmes for the general public benefit. He mentioned Shahrbeen programme of Radio Kashmir and appreciated its production.

Omar Abdullah said that is abode of different cultures and languages, as such, Radio Kashmir and Doordarshan has to reach to every area and formulate programmes in different languages. “I am happy to note that the programmes presently broadcasted and telecasted take care of this requirement”, he said emphasizing the need for its further upgrading and improvement.

The Chief Minister appreciated the efforts of Union Minister for Information and Broadcasting for helping Doordarshan and Radio Kashmir to expand its programmes and broad base its coverage across the State. He congratulated the Prasar Bharti for this initiative and hoped that more FM Channels will come in near future in the State. He also stressed the need of addressing the problems of the staff and functionaries of the duo stations.

In his speech, Parliament Member and President J&K Predesh Congress Committee, Prof. Saif-ud-Din Soz highlighted the role of Radio Kashmir in reaching out people across the State through various programmes of greater informative, educative and news value. He said Radio Kashmir has gained huge popularity and is heard across the State interestingly by the people.

He congratulated the Prasar Bharti Authorities for launch of FM Channel-2 here and also conveyed his gratitude to the Union Minister for Information and Broadcasting for this gesture.

Speaking on the occasion Secretary, Prasar Bharti, Uday Verma said that four new FM stations at Kargil, Drass, Tsuru and Padam have been completed. He requested the Chief Minister to also announce their distant inauguration from here which the Chief Minister accepted and announced these stations opened.

The Secretary said that 10 to 15 new FM stations are being set up in in near future adding that Prasar Bharti has a programme of setting up 839 new FM stations in private sector in 290 cities of the Country and is getting priority in this programme. He said that 10 to 20 FM Channels in private sector have been earmarked for under this programme. He said the license fee for the private parties intending to launch FM stations in the State would be half as compared to the private persons in rest of the Country. He said the rental fee for the private parties of will also be half as compared to others.

The Secretary conveyed best wishes of Union Information and Broadcasting Minister to Doordarshan and Radio Kashmir, and added that he has been asked by the Minister to assure the Chief Minister of that Prasar Bharti would do whatever possible for upgrading and improving the public broadcasting in the State.