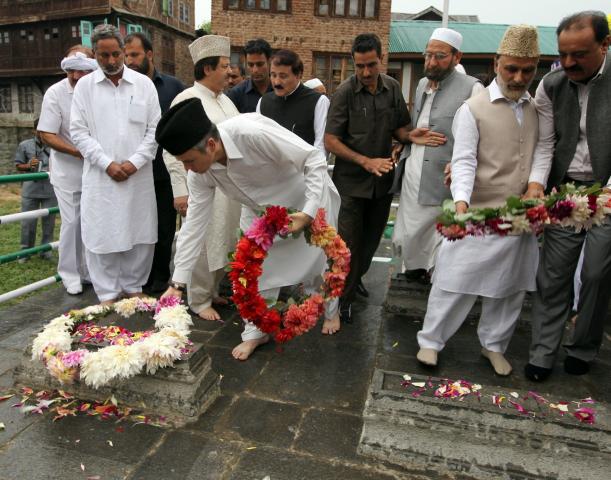 The Chief Minister said that the sacrifice of martyrs to free the society from autocracy and lay edifice for democracy and human dignity is one of the richest chapters of the history of Jammu and Kashmir.

"The best way to pay homage to the martyrs is to help create equitable and palatable environment for everyone to grow and develop in a democratic atmosphere", he added.

The minister for Finance and Ladakh Affairs, A.R. Rather has paid rich tributes to the martyrs of July, 13 1931, adding that valiant Hero’s by offering sacrifice of their lives laid the edifice of a pluralistic, secular and welfare state.

While paying glowing tributes to the martyrs, Rather said the Martyrdom was a fight and a strong resistance against suppression, autocracy and dictatorship. He said it is our collective responsibility to take the mission of martyrs to its logical end by rising above political considerations and individual ideologies to ensure welfare of the common masses.

Rather said better way to pay homage to the martyrs is to nourish and uphold the principles of humanity, equality and co-existence, which are the hallmark of our centuries old rich traditions and ethos.

Recalling supreme sacrifices offered by the martyrs against autocracy and suppression, Yaseen said their martyrdom laid the foundation of a democratic and secular state."Now it is our primary duty to work for the fulfillment of the cherished mission of the martyrs.

Meanwhile on the direction of Hakeem Muhammad Yaseen the leaders of PDF led by senior Vice President, Muhammad Yousuf Shair this Morning went to Mazar-e-Shohada in downtown Srinagar and paid floral tributes to the martyrs. They also offered Fateh at the martyrs graveyard and prayed for the peace of their souls. They also prayed for peace and prosperity of the state.