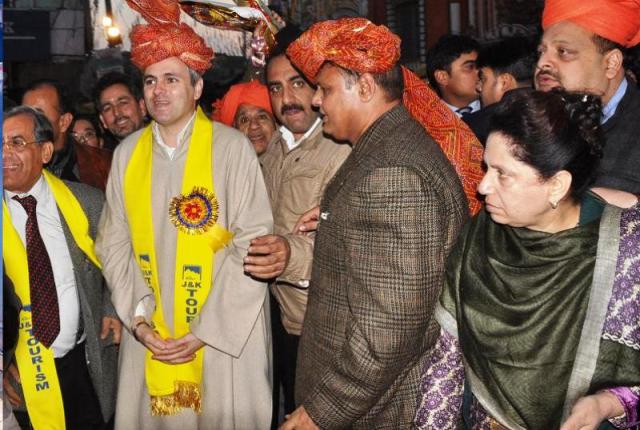 The Chief Minister greeted the people on the occasion and wished a happy and prosperous future to them. He was attired in a traditional Dogra outfits and offered ground nuts to the fire in a symbolic gesture.

The 2-day festival was jointly organized by the Tourism Department, J&K Academy of Art, Culture and Languages, Raghunath Bazar Association, hoteliers, Travel and Trade Associations.          Artists of presented short skits depicting the traditional Lohri festival and its importance, which is celebrated to bid good bye to cold season. A large, number of people present on the occasion witnessed the variety cultural programmes presented by the artists.

Enroute the students were briefed about the centuries old heritage buildings and temples like Amar Mahal Palace, Panjtherthi Temples, Mubarak Mandi and Kali Jani.  The Heritage walk was organized with the objective showcasing the heritage of and generating awareness among the people especially the school going children for its preservation and utility.

Director Tourism senior functionaries of Education and Tourism Department besides members of Travel and Trade Associations were present on the occasion.

Relevantly, this Lohri-Raghunath Bazar 2011 Mega festival was inaugurated by the Minister for Tourism last night at Bagh-e-Bahu.

On the occasion a variety of cultural programme was organized by the artists of Song and Drama division, Govt. of India showcasing the culture and Lohri traditions of which kept the audience spell bound. An ethnic food festival was also organized on the occasion depicting unique cuisine of the State.