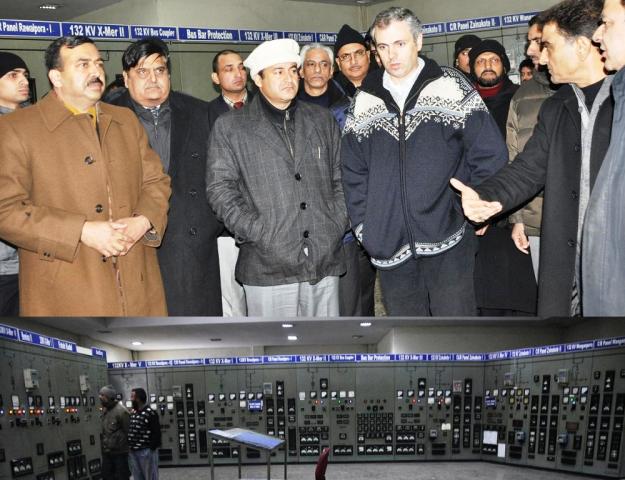 ,January 07 (Scoop News) –Chief Minister,  Omar Abdullah today arrived at to take stock of the situation in the valley after the snowfall of yesterday.

The Chief Minister directed the PDD not to make any preference in supplying electricity to VIP areas when power supply to entire valley is disrupted as a result of snowfall.

Immediately after his arrival at when the Chief Minister reached his Gupkar residence, he found that electricity was on in his house and nearby VIP areas while as the same was not available in other parts of the valley. He immediately directed disconnection of power supply to his residential house and these VIPs areas till the supply to entire valley is not restored back.

The Chief Minister directed PDD to give preference to hospitals and essential installations in supplying electricity till damage caused to transmission lines as a result of snowfall is repaired and electricity is restored back.

It is for the first time that the Chief Minister has preferred similar treatment with regard to power supply to his residential house as given to other parts of the valley at the time of minimum supply of power caused in sequel to damage caused to transmission lines because of snowfall.

The Chief Minister soon after his arrival rushed to the Power Development Department headquarter at Bemina and received first hand appraisal of the damages caused to power installations due to heavy snowfall. He also received the status of restoration operation initiated by the Power Development Department to restore the power supply in the Valley.

The Chief Minister was informed that as many as 15 grid stations have been affected by the snowfall in the Valley besides damaging transmission lines at five places including one at Chenani.

It was stated that restoration work is being done on war footing as per the directions of the Chief Minister and transmission line has been restored at two places while the work is going on for correcting the damages at other places. The Chief Minister was told that his directions with regard to the supply of power to hospitals and other essential installations are being adhered to and power available at present is being supplied to the hospitals and other essential services.

The Chief Minister directed the power development department to put in redoubled efforts to ensure speedy restoration of power supply in the Valley.

The Chief Minister also received brief about the snow clearance on various roads and highways and functioning of PHE schemes besides availability of essential commodities, LPG, fuel and kerosene oil at a meeting of officers.

The Chief Minister was informed that the snow has been cleared on all highways and district roads and the operation is in full swing on the interior roads. He was informed that PHE installations have been made functional and there is sufficient stock of essentials and fuel in the Valley.

The Chief Minister asked the divisional administration to keep men and machinery alert across the Valley to face the challenges of weather vagaries and other eventualities.