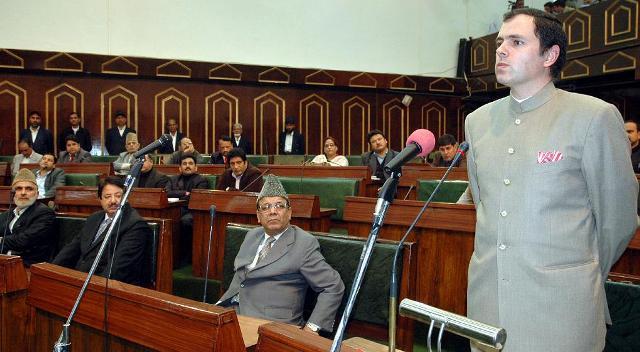 Immediately after Governor’s Address to the joint session of  the State Legislature, the Legislative Assembly met  separately and Speaker Mohammad Akbar Lone, made a reference to the sad demise of the aforesaid leaders  and paid glowing tributes to them.

He dwelt in details on the contribution they made in the political arena of the country and the State.

Omar said that  Jyoti Basu was a historic personality who became Chief Minister of for five terms and always remained connected with the people at grass roots level. He observed that had his party allowed him to become the Prime Minister of India, a new chapter in the parliamentary history of would have discernable.

The Chief Minister said that Jyoti Basu nurtured the secularism and socialism in the country and referred to his    attachment with as he had a very close affinity with Sher-i-Kashmir Sheikh Mohammad Abdullah and Dr. Farooq Abdullah. “I myself got the opportunity to work with    Jyoti Basu in the political field”, he added.

Paying homage to Aga Syeed Mohammad,  Omar said that Aga Sahib was a top ranking religious scholar and political leader, who worked for the  betterment of the people of Leh and Kargil.

The Chief Minister, in his tributes to  A. R. Atri, said that  Atri during his political carrier, besides projecting the cause of poorer section of the society, also contributed in providing social justice to the all shades of the people.

Omar also described Sofi Ghulam Mohammad and Khawaja Sanaullah Bhat, as doyens of Journalism and    said both the distinguished editors used their pen to bring forth the truth and reform the society. He said both the Editors had special quality of highlighting public issues through write-ups and editorials. He mentioned the regular column “Khazer Sochata hai Wullar ke- kinaray” of Daily Aftab, penned by  Sanaullah Bhat which generally touched in its typical way the various issues confronted to the society.

Later, the House observed two minutes silence as a mark of respect to the departed leaders and others.