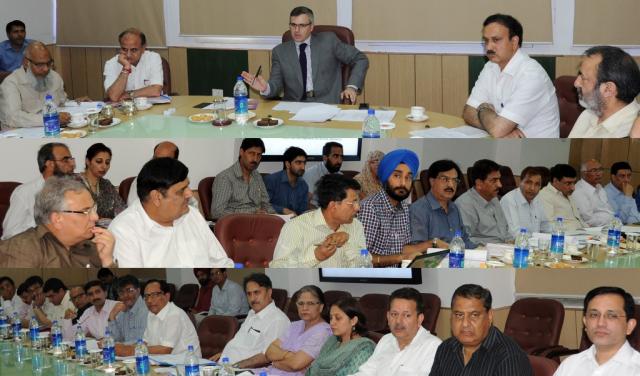 scoopnews.in/det.aspxJammu, April 23 (Scoop News) –Chief Minister Omar Abdullah Tuesday reiterated the demand for rail coach factory in the State to overcome the economic stress and address unemployment problem caused due to militancy during a long saga of over 20 years.

The Chief Minister said that this matter would be given further thrust at the Union Government level adding that such an initiative by the Central Government is significantly needed to expand economic activities, give fillip to industrialization and create substantial jobs for youth.

Chairing the meeting of J&K State Industrial Advisory Committee (IAC) of which he is the Chairman also, the Chief Minister directed for constitution of Committees to be headed by Economic Advisor to the Government for framing sub policy packages for industrially backward districts and service sectors like agriculture, IT, transport etc to help growth and development of feasible industries all across the State.

Omar Abdullah said that the benefits of packages and concessions available in the field of industry should accrue universally bringing industrially backward districts under its focus properly. He said identification of areas for launch of feasible industrial units and encouraging budding entrepreneurs at district level should form the important ingredient of this programme. He said there is greater scope for establishing industrial units especially in MSME sector in all the districts of the State. “This needs to be harnessed and youth facilitated and encouraged to come forward and be players in the industrial development process in the State”, he added.

Highlighting the need for a befitting and comprehensive Trade Policy in the State, the Chief Minister directed the Committee he has constituted in this respect recently, to timeline its task and come up with the Policy as soon as possible. He said a well defined Trade Policy is essential to help the growth and expansion of trade and commerce activities and encourage young people to venture in this sector.

In a PowerPoint presentation, Commissioner Secretary Industries and Commerce, Shantmanu gave over view of the activities under way in the State for the growth and development of industrial sector and creation of new industrial estates at different places in the State.

Explaining various issues incorporated in the agenda, the Commissioner Secretary Industries said that in order to cater to the needs regarding setting up of industrial estates in the State to accommodate new entrepreneurs and help industrialization about 22 places have been identified in the State for developing industrial estates. He said the task is being carried forward on fast track and the programme at present is at the stages of acquisition of land and process of identification of feasible locations.

It was stated that in Kashmir division new industrial estates are proposed at Government Match Factory Barmaulla, Khanmoh, Chattergam, Mohammoodabad, Dooru, Waripora in Tangmarg, Takia Razak, Shahtral in Pulwama, Kunan, Poshpora in Kupwara, Malwan in Kulgam, Khalmulla and Takia in Ganderbal, Aglar in Shopian, Khurbathong in Kargil and Khrew near Khanmoh.

In Jammu division these estates are being developed at Khudali, Pochal in Kishtwar, Lambri in Rajouri, Surankote in Poonch, Beoli in Doda, Nimbla in Reasi, Dambra in Billawar, Chack Bulanda in Hiranagar and Majalta in Udhampur. It was further said that 2763 kanals of land for IGC Samba, Phase-III at Village Krandi Ramnagar and Rakh Tambteli is under execution for which over Rs. 43.10 crores have been advanced to the Collector. Another chunk of 3502 kanals of land is under development for industrial estate Ghati Kathua.