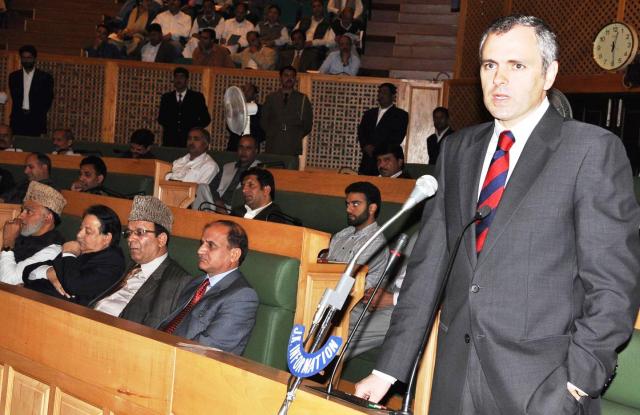 , September 30 (Scoop News) -Rejecting the tradition of playing politics over dead bodies, Chief Minister Omar Abdullah Thursday said that he shares the sorrow and gloom of every family whose dear one has been killed in the recent law and order situation in the Valley.

“Playing politics on dead bodies is not my trait”, he said adding that the loss of precious 109 lives has given severe shock and sorrow not only to his body but to his soul. “I feel as if 109 parts of my heart have been amputated after opening my chest. God alone knows how much I am grieved and how much I am bereaved”, he said and extended heartfelt and sincere condolences to the families who have lost their dears ones in last three months law and order situation in the Valley.

Omar said that many people have made it their characteristic and tradition to deliver political speeches and tied black bands to exploit the grief and sorrow of common sufferers, “but I am not of that sort”, he said adding that despite politicization of obituary session in the House by the PDP leader and an Independent MLA, he didn’t feel it proper and humane to do politics on this occasion of conveying sorrow to the bereaved families. “I am ready to speak at full length on the subject when the appropriate time is allotted in the Assembly”, he said and ridiculed the tradition and mannerism of utilizing the grief and sorrow meetings as a political field to venture in.

Expressing solidarity with the bereaved families, the Chief Minister prayed for the peace to the departed souls and expressed hope that such incidents will not happen in future and State would embark in a phase of peace and tranquillity.

Omar Abdullah also expressed sorrow over the loss of lives in the cloud burst and flush floods in Leh. He said large number of human lives was consumed in this natural calamity. “Experts told me that this catastrophe is the result of climatic change and its re-occurrence cannot be ruled out”, he said calling for collective approach to restricting human interference with the nature.

Paying tributes to the late Vice President of India Bhairon Singh Shekhawat, the Chief Minister said that  Shekhawat rose to this post from the lower level through his capacity, capability and political ability.

The Chief Minister also paid rich tributes to late Sheikh Ghulam Mohammad Bhaderwahi and said that the late leader was equally popular in both the divisions of which rarely politicians enjoy. He also paid homage to late Kumari Shanta Bharti and highlighted her role in organizing and strengthening women cooperative movement in division. “She worked with Madr-e-Meherban to up hold the cause of women and work for their betterment”, he added.

Omar Abdullah in his tributes to late Shahjahan Dar and late Bhagat Ghouri Shankar said that both these legislators represented the people of their respective constituencies in the State Assembly and other forums and worked hard for upliftment of general people.