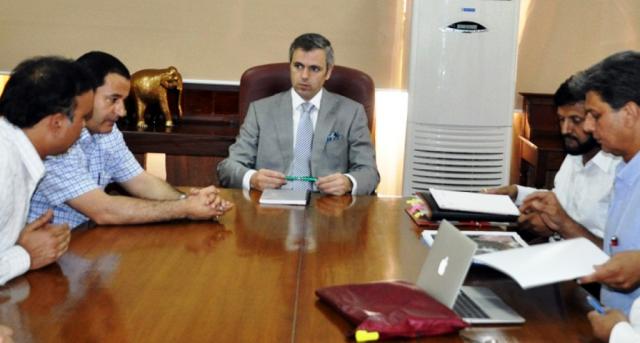 Jammu, April 03 (Scoop News) –  J&K  Chief Minister, Omar Abdullah Tuesday said that connecting remote and far-flung areas with highways and opening these for economic activities is the priority concern of his Government.

“Necessary thrust has been given to the construction of road connectivity in these areas” he said while reviewing the status of roads in remote villages, at a meeting here which was attended by Minister of State for R&B, Javid Ahmad Dar and MLA Kishtwar, Sajjad Ahmad Kitchloo.

Omar Abdullah said that inter-district connectivity and construction of tunnels, bridges and roads to link remote areas has been flagged as focused area. He said that better road communication and connectivity is essentially important to bring about economic welfare in these areas as such government has taken up various road construction schemes in hand.

It was stated that in division more than 573 kilometres of new roads have been constructed during the last year besides building 35 bridges and completing 31 schemes under NABARD and 4 under CRF.

It was stated that 225 schemes involving Rs. 230 crore have been put for e-tendering by the R&B Department. It was further stated that in Kishtwar district 42 schemes under NABARD have been completed at an estimated cost of Rs. 20.38 crores.

Taking appraisal of the status of road project from Kishtwar to Matigoveran in district Anantnag, he was told that the road stretch from Kishtwar-Bhandarkote-Patimahal-Ekhala comprising 37 kilometres have been made motorable while earthwork is in progress on 8 kilometres from Ekhala to Dungdru. The road is as bridal-path from Dungdru-Sunder-Shirshi-Lopra-Hanzal-Nawpachi while the road from Nawpachi-Asthangam-Purankundal-Mulwarwan-Inshan-Guzer is fair-weather and the road from Guzer-Margantop and Margantop to Matigoveran in district Anantnag is motorable.

It was stated that construction of Patimahal Dachhan road from Patimahal to Hatri a head of Lopra has been sanctioned and the road from Inshan to Margi is under execution under PMGSY.

The MLA Kishtwar Sajad Ahmad Kitchloo highlighted the need for construction of this road to open up a large chunk of area from Bhandarkote to Inshan and Margi and also connecting Inshan with district Anantnag. He said that its completion would revolutionize the economic betterment of the people of remote and far-flung areas.

The Chief Minister directed that a team of officers led by Minister of State for R&B would visit the Kishtwar and inspect the road construction programme on spot. The team will also suggest measures if required to be taken for fast tracking the construction of Kishtwar-Anantnag road project.