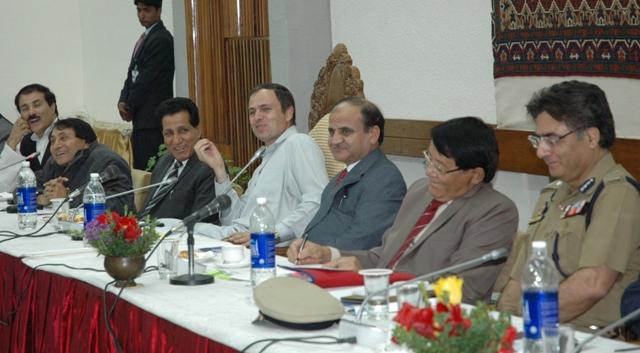 , April 07 (Scoop News) — The Chief Minister  Omar Abdullah has said that the government is committed to fulfill the genuine demands of the employees most of which have already been met. The government requires whooping sum of Rs. 4200 crores to disburse the arrears on account of implementation of sixth pay commission recommendations for which resources have to be arranged.

Omar was addressing a high level meeting of Divisional Administration and Heads of Departments at SKICC here this evening.

He said that the Government has not closed its doors for negotiations and urged upon the employees to resume their duties in the larger public interest. He said that the government is committed to fulfill the genuine demands of the employees most of which have already been met. The government requires whooping sum of Rs. 4200 crores to disburse the arrears on account of implementation of sixth pay commission recommendations for which resources have to be arranged.

Chief Minister was addressing a high level meeting of Divisional Administration and Heads of Departments at SKICC here this evening.

Omar Abdullah called upon the officers to ensure that the people are not put to any inconvenience due to the strike of the employees and exhorted upon them to ensure that the contingency plans are fully implemented. He said that our primary responsibility is to provide services to the greater population who expect effective delivery of services as such efforts should be made to provide the services across the board with focus on essential services particularly Education, Health, Drinking Water, Electricity and Public Distribution.

The Chief Minister said that No Work No Pay provision shall be strictly implemented and the resolve of the government in this regard remains undeterred. He said that we are committed to the people of the state and not to ourselves and no effort should be left to serve the population of the state in a way they expect us to do.

Expecting an early resolution to the problem the Chief Minister said that his government has always taken an extra step to fulfill the genuine demands of its employees and despite financial resources we were among the first few states in the country to implement the recommendations of the Sixth Pay Commission and during the last year the government incurred an extra expenditure of Rs. 1800 crore on the demands of our employees. The employees must understand that the situation cannot be pushed beyond a certain point and appealed them to resume work and come forward for the discussions to find an amicable solution to the problem.  Omar said that we are being paid to serve the people weather as Public representatives or Public Servants and our Aim must be that people of the state do not suffer at any cost.

Expressing satisfaction on the performance of the Divisional Administration he impressed upon the officers to ensure that discomfort level faced by the people in view of strike is kept to bare minimum and people suffer to the least possible extent.

The Chief Minister was informed that 1137 fair price shops are functional in the valley for distribution of food grains to the consumers. Regarding the functioning of hospitals it was stated that 2239 patients in SMHS were provided Medicare in the OPD in two days and 45 major surgeries were conducted in LD Hospital. The Principal GMC Srinagar said that the associated hospitals are also functioning and providing patient care and no one goes back unattended . The Director Agriculture informed that 7000 quintals of seed have already been dispatched to various stations for distribution purposes among the farming community.

Earlier, the Chief Secretary  S. S. Kapur impressed upon the officers particularly dealing with essentials including Agriculture and Horticulture to gear up their field agencies to cater to the requirements of the people. He asked Director Agriculture to ensure availability of pesticides and seeds in all the areas of the valley in view of Kharif season. He directed the Principal GMC Srinagar to ensure that the OPD in the SMHS and Associated hospitals are made fully functional.

Kapur emphasized the need for ensuring sanitation in and around and other Urban and Semi Urban areas of the valley.

The Divisional Commissioner Miss Naseem Lanker gave resume of the contingency plan prepared by various departments to meet any exigency. She assured that the divisional administration will come up to the expectations of the people during this strike period