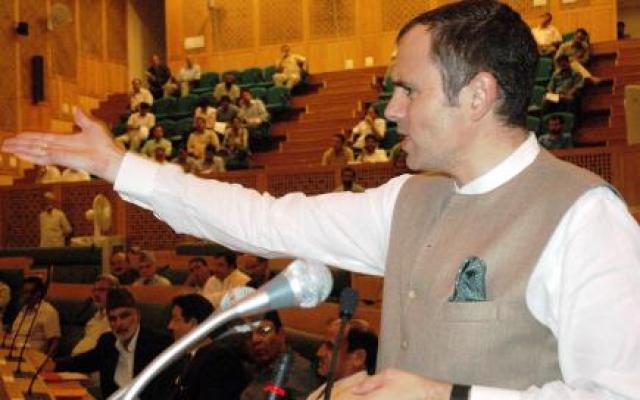 , August 27 (Vijay Kumar) and Kashmir Chief Minister, Omar Abdullah on Thursday said that PDP has brought AFSPA in the State and “God willing, we will revoke this during our tenure of the government”.

Omar Abdulla was replying the 2-day discussion on his grants in the Legislative Assembly today. He had moved the Demand for grants yesterday morning for the departments under his charge and 42 members spoke on the grants during the two days. As many as 529 cut motions were moved by the members to discuss the departments under the control of the Chief Minister.

He told PDP opposition that records bear testimony that during the three years tenure of PDP they neither talked of any political solution of nor said anything about removing AFSPA or de-militarization. “I have gone through all records and not found even a letter or any reference that your Sar Parast (Mufti Mohammad Sayeed) has ever written about any of these matters to the Prime Minister or made any reference in the Unified Command meetings”, he maintained.

Quoting the statement of Mufti Mohammad Sayeed made at Ganderbal after his taking over as Chief Minister of Jammu and Kashmir telling the people “Mujahideen ab bundook rakho aap key numaindey aap key liye baat karney aayain hain (Mujahid: You drop the gun now, as your own representatives have come to talk for you). Mr. Omar said that after making this statement, the PDP patron and the then Chief Minister never talked about this issue nor took any action in this direction.

“You may look by your statements to be anti-national but I do not consider you or your actions anti-national in any manner as the records again bear testimony to the same”, he said adding that in the first seven months of PDP government 850 militants were killed and in the year 2003 the number of militants killed was 1490 while as it stood at 976 in 2004 and 917 during 2005. The Chief Minister said that the records of Parliament are also testimony to the fact that Ms. Mehbooba Mufti, the then Parliament Member, never spoke even a word in the Parliament about issue, AFSPA, de-militarization, etc.

Mr. Omar said that someone has rightly coined the name of ‘demand supply’ politics for PDP adding that the party tailors the slogans according to the market needs. “The records speak loud and clear about your politics of making hollow slogans according to need of the market”, he said giving the example of the Amarnath land row. He said that PDP was part and parcel of the decision regarding the Amarnath land grant but sensing the pulse of people, it took the party minutes to take u-turn ditching its own partner. He also referred to the opening of Srinagar-Muzaffarabad road and said that PDP left no occasion to get credit for the decision made by and . “However, when out of power Ms Mehbooba Mufti at a seminar in Jamia Melia said that the opening of Srinagar-Muzaffarabad road was mere a gimmick (Dekhawa). Similarly, PDP cries on the top of its voice about task force, when in fact it is the same party which strengthened the task force and passed on it to Mr. Azad’s government where from my government inherited the force. This all substantiates the correct coinage of ‘demand supply’ politics made for the PDP”.

Mr. Omar said that the concern of his government to uphold human rights under all circumstances is loud and clear. “Whenever any incident of human rights violation was reported, we acted promptly and delivered on ground”, he said citing the example of Bomia, Khaigam, Larkipora, Baramulla and the individual cases of Mr. Manzoor Ahmad Baig and Mr. Asrar Ahmad Dar of Maisuma.

Referring to the Shopian incident, Mr. Omar said that since this unfortunate and heinous crime took place, he has not come out of the impact of the tragedy and is constantly thinking about booking the culprits and punishing them severely whosoever high he may be.

Mr. Omar said that for the first time since last 20 years the Republic Day function on 26th January and Independence Day function on 15th August were held in a conducive and peaceful atmosphere without interfering with the daily life routine of the people. “This can be visualized by the fact that on the Independence Day 2.5 lakh locals and tourists visited Pahalgam and over 1.5 lakh Gulmarg”, he said and added that to bring J&K police on forefront and the security forces on the second line, is the determination of the coalition government which will be achieved gradually.

The Chief Minister said that his government does not want to detain leaders like Syed Ali Shah Geelani but is compelled to take this action for the maintenance of law and order and safeguarding the general masses from unnecessary violence, killings and harassment. However, he said the graph of his government on this count is even better than that of PDP government during which 228 arrests were made and 142 releases effected in the first seven months. While as during the seven months of my government only 152 people were arrested and 121 released. Of the arrestees, 17 were foreign terrorists and 33 timber smugglers, he said, “I do not want to hold the separatist leaders under PSA even for a day extra if they do not disturb law and order. It is unfortunate they abet the innocent youth to resort to uncalled for stone-pelting on security forces putting their lives to danger while they, their children and families relish the comforts of their homes.

The Chief Minister made it clear that his government would work for restoring the two track dialogue channel between and and the Centre and the State involving all shades of opinions to realize political settlement of all issues pertaining to . “I have learnt that the Chairman, Working Group on Centre-State relations, Sageer Ahmad is submitting the recommendations of the group to the Prime Minister, but I would like him to at least convene a meeting of the members of the group for final review of the recommendations before the report is submitted”.