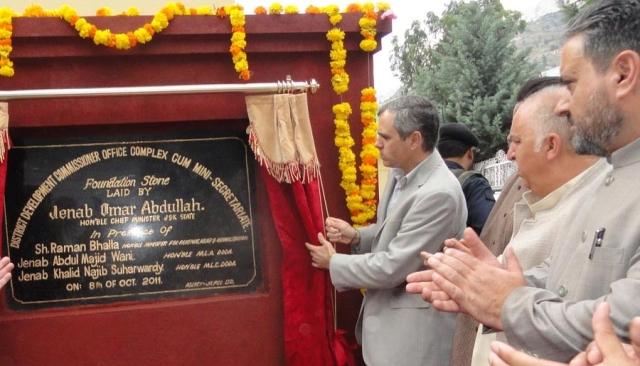 Doda/Jammu, October 8 (Scoop News) –    Laying foundation of Rs. 21.56 crore-Mini Secretariat here on Saturday, Chief Minister Omar Abdullah sensitized the administration towards public service and said that prompt response to the needs of people and timeline delivery should be the benchmark of government functionaries.

The Chief Minister said that government functionaries have an important role to play in translating the development schemes into reality ensuring benefits of these reach to the people at all levels.

Omar Abdullah said that his Government has enacted Public Service Guarantee Act (PSGA) to provide legal rights to the people to get services from the administration in a fixed time frame. He said government functionaries are bound to deliver these services to the people in a specific time frame identified for particular service.

The Chief Minister said that 45 services of six departments of CAPD, Power, Transport, PHE, Housing and Revenue have been notified as public services under the Act in the first instance and time frame for the delivery of each has been fixed. He told the administration to ensure implementation of the Act in letter and spirit and help in creation of healthy work culture necessary for good-governance.

The Chief Minister said that road connectivity in the hilly and remote districts like Doda is receiving priority attention of the Government. “We have initiated various schemes in this direction”, he said adding that all round development of these areas is possible by enhancing the accessibility and opening up of cut-off areas for economic activities.

The construction of Mini Secretariat at Doda was felt for a long time now as the existing District Development Commissioner’s office was housed in a 50 years old barrack type structures which was inadequate and insufficient for smooth functioning of the office. The most of the district offices were housed in rented accommodation at different places causing inconvenience to the public.

The Chief Minister released Rs. 5 crores for the new complex expected to be completed in three years. It would house all important district offices and facilitate general public to visit the offices and get their cases attended to.

The Chief Minister also laid foundation of Doda Truck Terminal to be constructed at a cost of Rs. 2 crores. He released Rs. one crore for launch of the project. Both these projects will be executed by JKPCC.

Minister for Revenue, Raman Bhalla in his speech on the occasion highlighted the achievements of the Government and said that equitable development of all areas is its policy.

Legislator, Abdul Majeed and Khalid Najeeb were present at the function. The District Development Commissioner, Doda gave construction details and utility of the Mini Secretariat Complex and the Truck Terminal.