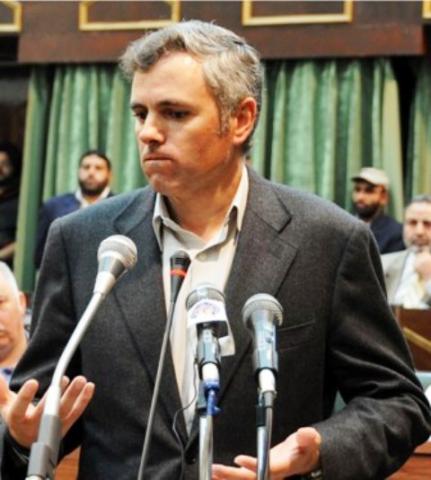 Jammu,February 5 (Scoop News) –Chief Minister, Omar Abdullah Tuesday in an emotional speech in Legislative Assembly expressed his anger and dismay over the killing of a Baramulla Boy by the forces, describing it an unpardonable act and assured justice to the bereaved family.

“This is why I am vehemently raising the issue of partial revocation of AFSPA so that the erring forces personnel do not go scot-free”, he told Legislative Assembly while speaking on the statement made by Law Minister in the House informing the killing of a boy and injury to other by forces in Baramulla.

Responding to the protest, walk-out by main opposition party (PDP) and dismay expressed by all the members of the House over the incident, the Chief Minister said that he is himself full with anger but he is not in a position to walk-out like opposition members. “You cannot feel the anger I am boiling with and the difficulty I am facing to speak at this point in time”, he said adding that on the Chief Minister’s Chair he has to give so many answers for the commissions and omissions of others. “I have to seek apology for the actions, I am not responsible for nor anywhere related to these. I am being asked to answer the question of Afzal Guru, return of mortal remains to his family, use of unnecessary force by Army. I have to give reply for every bullet they fire on civilian. What reply I have for my people in these matters”, he questioned and said that when his people suffer it pains him deep; when his people are killed his soul gets shattered. “But I will get the reply from those who are concerned with such incidents. I will seek justice for my people”, he lamented with anger.

“It is easy to say that Chief Minister of the State is all powerful but only those who sit on this chair can tell you how powerful a Chief Minister of the State is. Let you ask this to (Mufti Sayeed) father of leader of single largest opposition party, Dr. Farooq Abdullah and Ghulam Nabi Azad who have remained Chief Ministers of the State”, he said and added that some opposition member has described him a daily wager. “I admit we are only daily wagers, our chairs are not permanent, we have to relinquish the offices after completing a fixed tenure so we are of course daily wagers and I have no hesitation in accepting it”, he said.

Omar Abdullah said that though these incidents are highly painful and emotion raising but to blame the country, while getting carried away by emotions, is not correct perception of expressing anger. “Wrong doing by some individuals does not call for blaming the country”, he added.

At this point in time when I had prepared myself to give full account of the achievements of my government while deliberating upon motion on thanks to the Governor for his address to the members of both the Houses, I am not in a position to say anything on this subject at present because a precious human life of a young person from my State has been killed and I am myself engulfed in anger and pain”, he said and added that at this time he would only extend his heartfelt condolence to the family who has lost its dear one. “I also convey the condolence of this House and that of the people of the State to the bereaved family”, he said assuring them justice. “I cannot bring back the dear one you have lost but my heart bleeds with you and my gloom is not less than anyone of you”, he said conveying his sympathy and solidarity to the bereaved family, and concluded his speech.