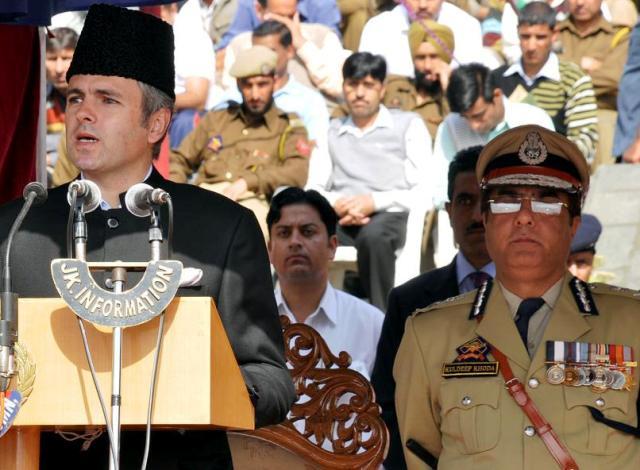 , October 21 (Scoop News) – Lauding the role of police force in combating militancy and maintaining law and order, Chief Minister, Omar Abdullah Thursday said that the past 20 years have been the years of challenge for the men in uniform.

“Concentration on curbing militancy during these years has put normal policing on back burner”, he said and emphasized the need of rejuvenating the basic unit of Station House Officer (SHO) to its prime importance.

Addressing Police Commemoration Day function at Zewan near here, the Chief Minister said that the rapport SHOs used to had with the general public, respected citizens and elders in the area under their jurisdictions acted as an important catalyst in maintaining law and order and restricting activities of unscrupulous element and mischief mongers.

“Government is working on a plan to make SHOs key factor once again in the maintenance of peace and judge their performance on this count”, he said adding that a gradual process has already been initiated in this regard.

Omar Abdullah said that the Jammu Kashmir Police and other para-military forces engaged in maintenance of law and order situation in the State had to face difficult times during last four months.

“The patience you have exhibited during last about one month is praise worthy and I would like you to render the duty in this spirit and exhibit yourself to be people friends. You are for the society and society is for you. Your basic duty is to safeguard you brethren and face the challenges with courage and patience”, he advised the Police Force.  He said the difficult period was not yet over and certain elements are still making announcements to disturb the peace. “Your patience will be put to test time and again but under all circumstances you have to commit to the restraint and highest degree of tolerance”, he added.

The Chief Minister said that his government would render every support to the police department in building well trained and well equipped police force capable of dealing both with militancy and law and order situations with different but befitting approaches.

Highlighting the sacrifices made by the police force in the State and elsewhere during the times of law and order situation and militancy, the Chief Minister urged them to uphold the oath they have taken while entering into the police force. “You should render your service with honesty and dedication exhibiting high principals of professionalism”.

Paying rich tributes to police martyrs who lost their lives in militancy related incidents and during the law and order situation, Omar Abdullah lauded the families who have sacrificed their loved ones for the cause of the people and the State. He said that the welfare of these families was on top of the agenda of the government.

Expressing the hope that permanent peace will be restored in the State, the Chief Minister wished for tranquility in the coming days. “It would be the happiest movement for me if next year while paying homage to the police martyrs on this day, I will find no name in the list of martyrs list of the year”.

Director General of Police, Kuldeep Khoda in his address on the occasion paid rich tributes to the martyrs and highlighted the courage and bravery exhibited by Jammu Kashmir Police and other police forces in dealing with law and order situations and combating militancy in the State.

The Director General of Police said that during the period of militancy as many as 5251 police personnel have been martyred which included jawans, officers, SPOs, VDCs, etc. He said the fight against militancy has not ended. “We are vigilant and determined to foil any act of terrorism with full capacity and capability”, he said and added that measures have been put in place to train the police force and equip it with modern weaponry.

Kuldeep Khoda lauded the Chief Minister for his keen interest in developing best police force in the State which would be capable of dealing with any situation with professional capacity.

The Director General of Police said that equal attention is being aid to the welfare of police martyrs’ families. “Over Rs. 7.12 Crores worth relief has been given to these families during last year besides paying Rs. 1.50 crore ex-gratia assistance. As many as 548 jobs have also been provided to the next of kin of the martyrs”, he added.

The Director General of Police also expressed gratitude to the Chief Minister for sanctioning allowances equal to 10 percent of the basic pay in favour of police personnel.

The names of those martyred from 1st September 2009 to 31st August 2010 were announced on the occasion and the role of martyrs carried in a traditional way by a contingent of police personnel. The police band played the martyrs songs and national anthem.